Here are two more figures for my Frostgrave warbands. The barbarian girl is from Copplestone with a Frostgrave plastic axe. The hedge knight is made from a Frostgrave plastic kit with Green Stuff chain-mail sleeves.
my wife thinks the Barbarian will get cold in Frostgrave, but I told her northern girls are built of sterner stuff that the softy southerners. 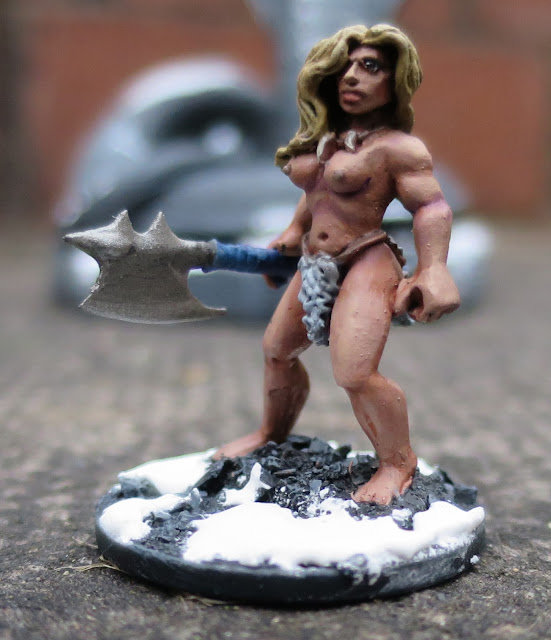 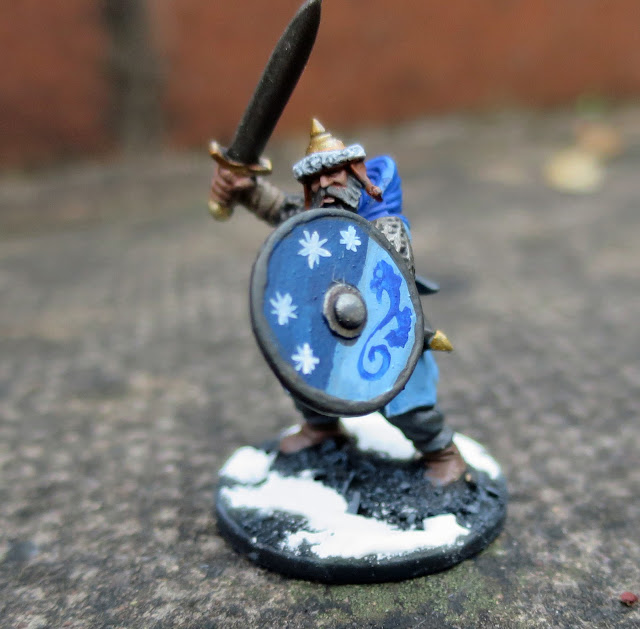 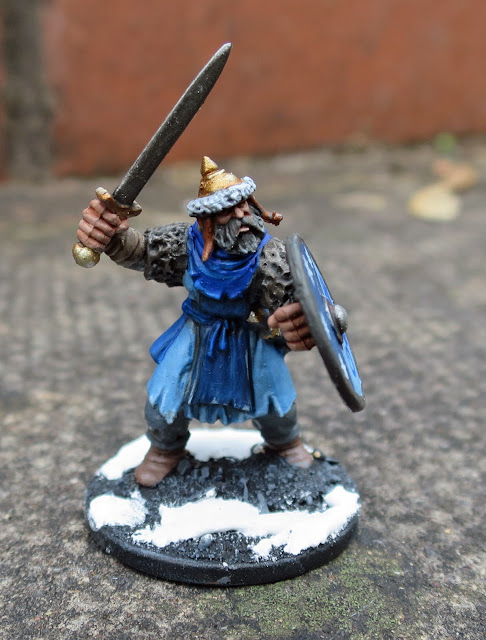 The 16th of December 1944 was the start of the German offence that became known as the Battle of Ardennes in America, and the Battle of the Bulge in Britain. It was a daring, and desperate gamble by the Germans as they attempted to push through a weakened american sector in the Ardennes Forest in Belgium, to cut the Allied advance off and secure a sea port. History tells us it was a failure, but it was a much closer run thing than hindsight might suggest. The surprise and force of the German attack shattered many of the American units stationed in the Ardennes, and it was only the heroic efforts of a few American that managed to stall the Germans long enough for Monty and the American Generals to rally and reinforce the sector.

Big Al had long dreamed of playing the Battle of the Bulge, and with the Earlswood Wargamers taking to Chain of Command it was decided that now was the right time (and 28mm was the right scale). These photos are from last weekends game. Most of the scenery is made by Big Al, with a few bits and bobs of mine. We ran two games simultaneously, one for beginners and one for sightly more experienced players, so that we could learn from each other. Al and I acted as 'tactical advisor/ tutor' to help teach the rules. Young James took command of my Fallschirmjagers, and Vlad commanded his own platoon of American Motorised troops.

This was the battlefield. The river was fordable but cost a dice of movement. The woods and hedges were soft cover and the barns were hard cover. 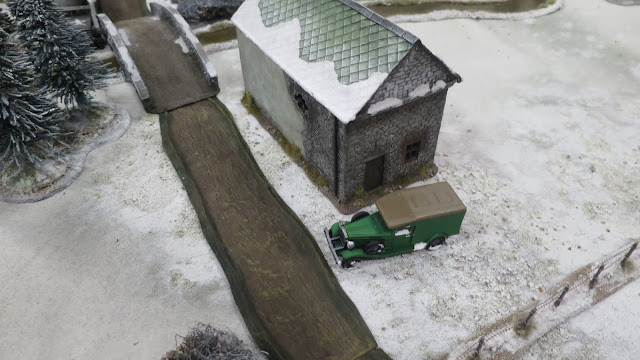 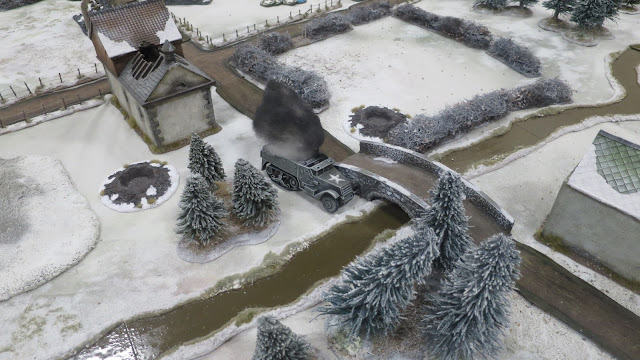 The Wrecked M5 was just a bit of colourful scenery and not an in game casualty. I assume it was a scout vehicle from Vlad's Mechanized platoon that was taken out by enemy fire, causing the Infantry to debus and attack the Fallschimjager on foot.

James played the FJ aggressive, which I think suits their style. In the first turn he sent a  platoon sergeant with a fire team over the river to try to seize on of Vlad's jump off points. It was a bold move, but on that was to prove vital . 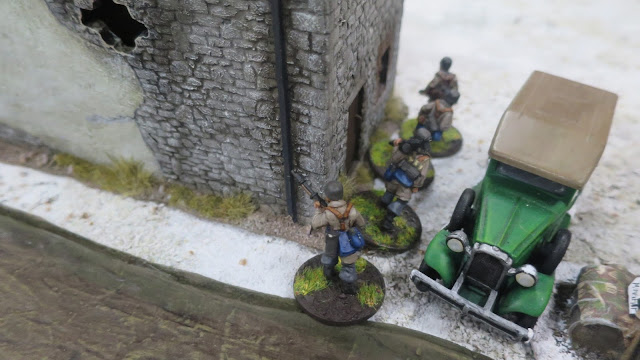 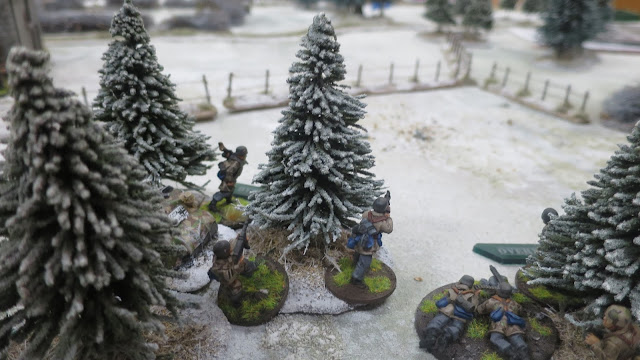 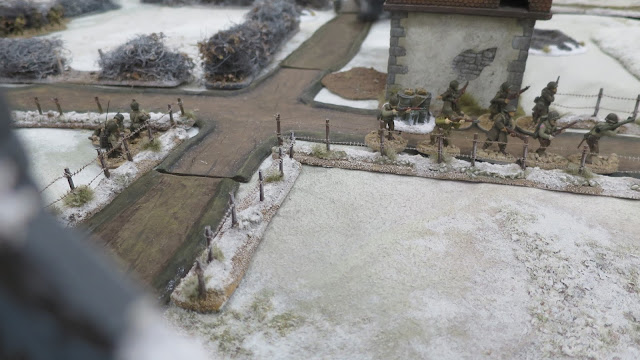 Americans tried to outflank the German proposition using the hills as cover but came under fire. They panicked when the FJ sergeant lead his men across the river towards their jump off point and ran back to assault the FJ in close-quarterer battle. It went badly for the Americans, who lacked the close range fire-power of the FJ and were routed, along with their senior officer.  The FJ's captured the Ami Jump Off Point and from there on it was a bit of a crap shoot. The remaining American Jump off points were exposed to fire from two FJ sections, so Vlad's reinforcements were coming on into a hale of fire form the FJ MG43s  As always James rolled amazing, and his lucky dice hammered Vlad's Yanks (at one point James rolled 11d6- needing a 5-6 to hit- and got 9 hits!).
James's superior position and fire-power meant that Vlad was struggling to bring troops on as they were coming under terrifying fire as soon as they came onto the board. Vlad's machining gun section, with its two 30mm MMG did worry James for a bit but after a load of lucky dice that was soon pinned too. Eventually Vlad was forced to concede, with two squads broken, and one pinned there was little else he could do to drive the FJ out of their positions. 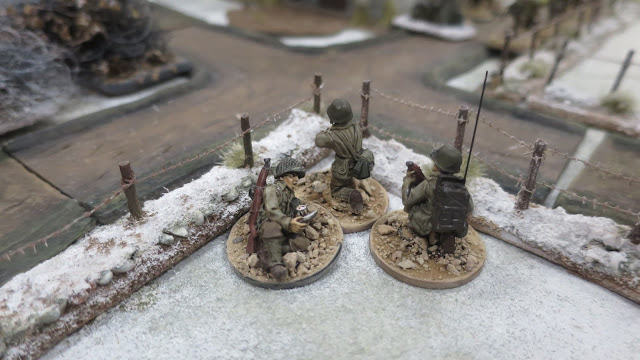 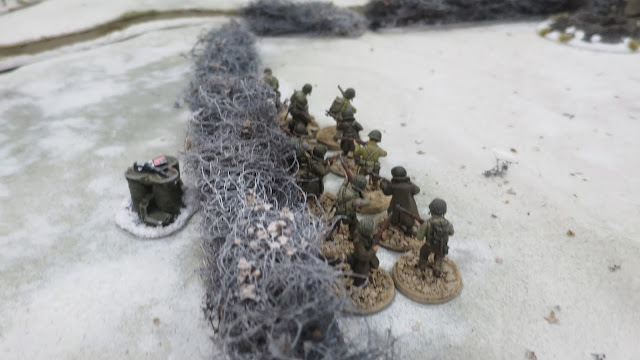 Vulcan Waylendsen the Enchanter is getting ready to journey to the Frozen City of Frostgrave to learn it's arcane secrets. 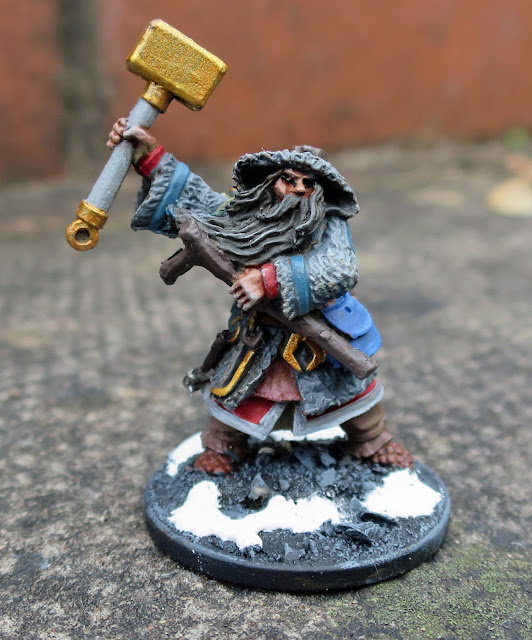 Here are two crossbow men ready to sign up to a warband- for a fee. 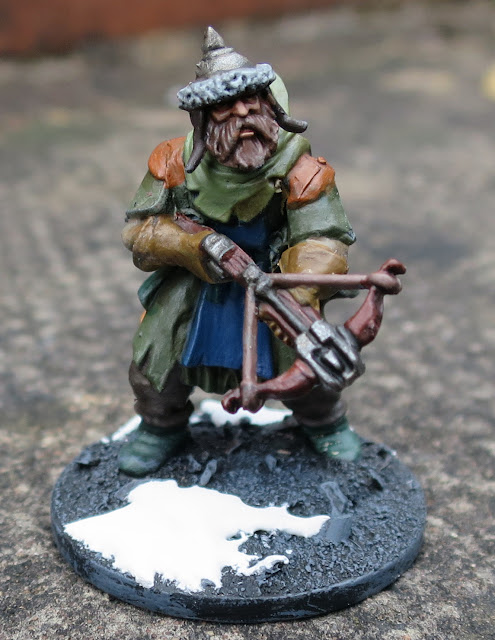 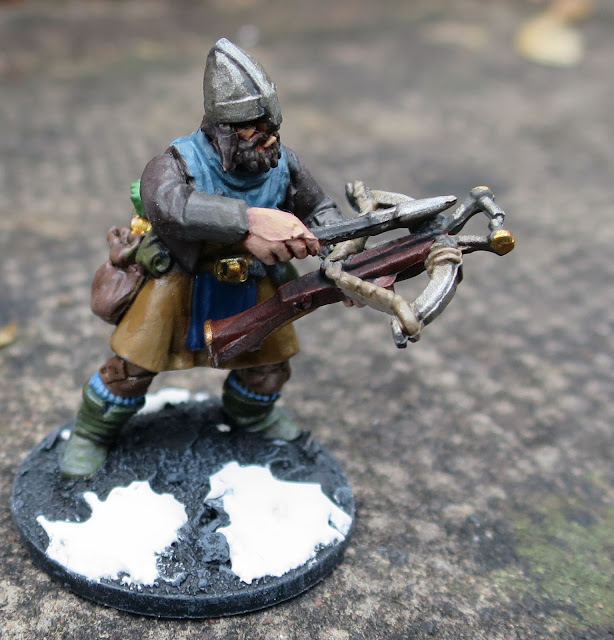 My first Frostgrave wizard is Ballatine Gul, a dastardly necromancer venturing into the Frozen City to recover unspeakable tomes and artefacts. 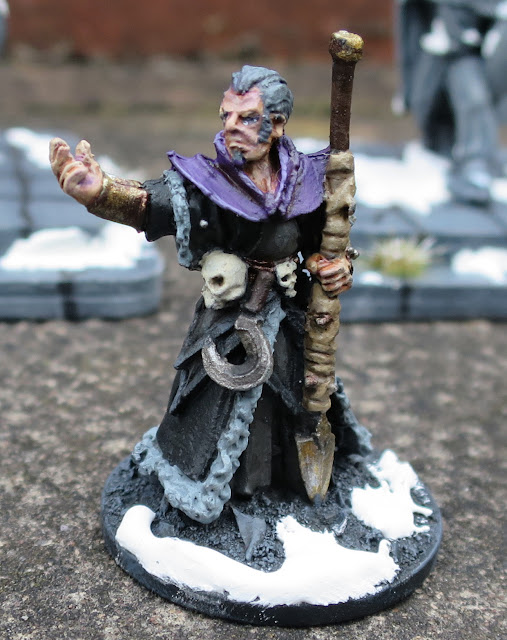 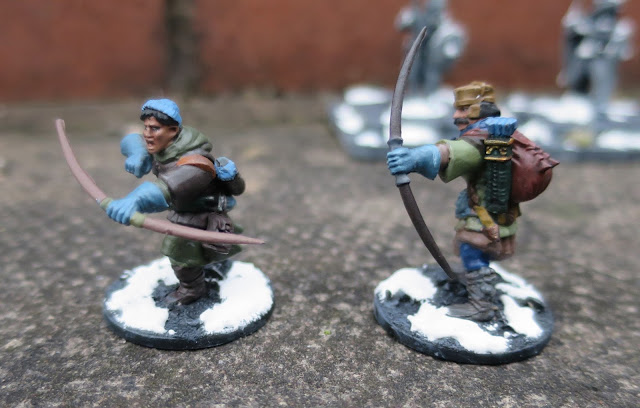 Two bowmen for Gul's warband, from the Frostgrave kit.
Posted by Rob Bresnen at 08:22 7 comments:

Frostgave treasure and a Treasure-hunter

This treasure marker and candle sticks were made from Reaper Bones accessories set. The treasure hunter is from a Game Workshop Mordhiem kit with a Frostgrave arm (not my best pose but it will do to fill the ranks) 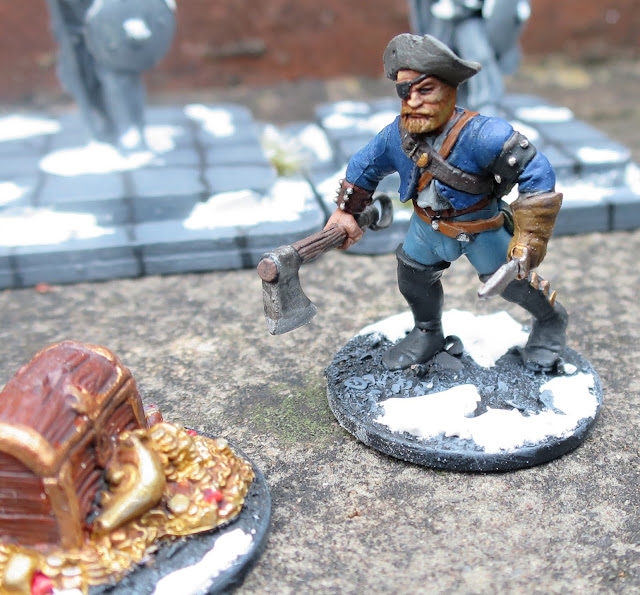 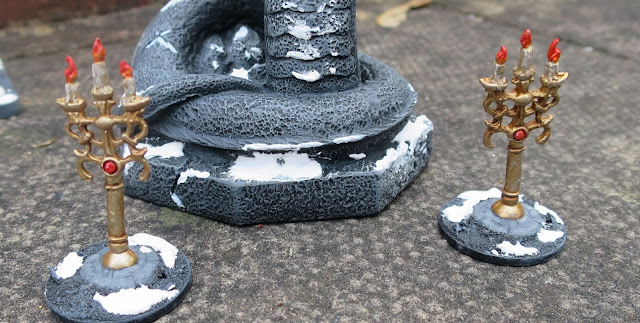 Frostgrave: Some Bits and Bobs

Here are a few bits and pieces I have been working on for Frostgrave. This snake statue was from a pet shop. It has been repainted by me, and the snow has been added using white paint and fine plaster filler. 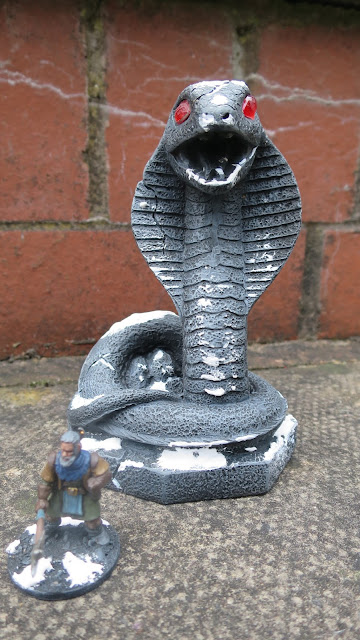 This is a Ranger made from the Frostgrave Soldier kit with a Games Workshop High Elf bow on his back and some Green Stuff bags and pouches. 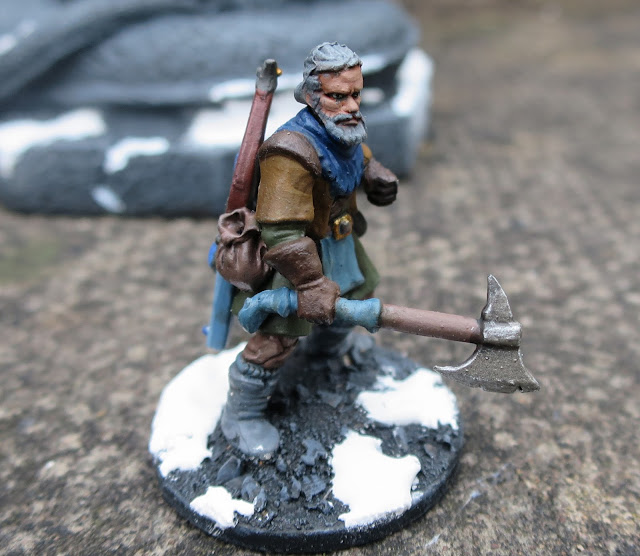 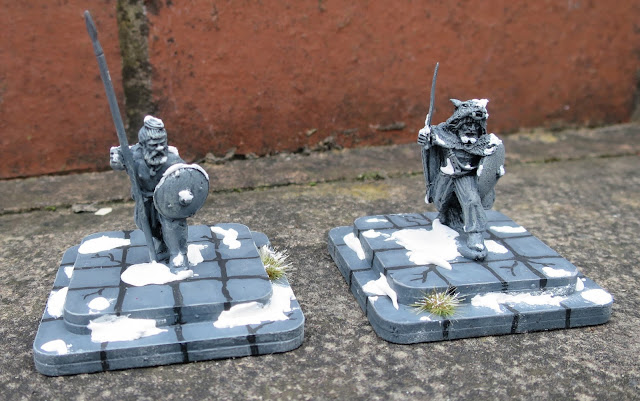 Old Man Maniwaring sat warming his feet on the stove while his wife and daughter prepared their evening meal. Things were good here at the farm- the harvest was in, and they had plenty of food for everyone, and even had enough to sell some at market. He could by his daughter that dress she wanted after all. who would have thought that when the left Portsmouth five years ago he would be here now, head of a thriving little village surround by fertile fields. He was a man of distinction, respected as the village leader.

He looked over to the rifle propped up by the doorway. It was, as always, loaded. Things hadn't always been as easy as they were now, and Old Man Mainwaring had learned the hard way that he had to be ready for anything. Of course he has heard rumours last week of Huron scouts in the valley, but they were a long way from the valley here; a peaceful little idle far from the busy towns and the dangers of the frontier. Old Man Mainwaring's reward for a lifetime of hard work.

Pulp Citizen and I got together for a game of Songs of Drums and Tomahawks last week. We used the Musket and Tomahawks mission generator and rolled Slaughter and Defend. Pulp Citizen took the role of the attackers-  A Huron Indian raiding party, and I took the part of English Settlers defending their womenfolk and homes from the natives. The Huron brief was simple- Kill or drive off all six on the villagers (the unarmed women figures) and the Settlers brief was to drive off the Huron.

I had another game of Chain of Command at Earlswood last week. The game saw my Fallschirmjager pitted against Keith's Yanks (although they were commanded by Tom, with Keith acting as referee/mentor). We made the Fallschirmjager elite, to see if it would make a difference to the game. Tom took a regular rifle platoon supported by a MMG and a mortar, and a Sherman tank. Big Al made some really nice hedges covered in frost and dead leaves.

Unfortunately for me the yanks were dug into some ruined farm houses, but luckily enough his line of sight was partially obscured by a ridge of hills running across the fields, meaning I could advance through cover until quite close to the Yankie's position.

Highlights for me- learning how to use smoke to cover an advance, and blowing up the Sherman with a panzerschreck.  Highlights for Tom- winning three turns in a row just as I launched my final assault.

Things I have learned- Use smoke more. Panzershrecks kill tanks, especially if you hit them in the side at close range! Elite Troops are very hard to kill!

Here are a few photos... 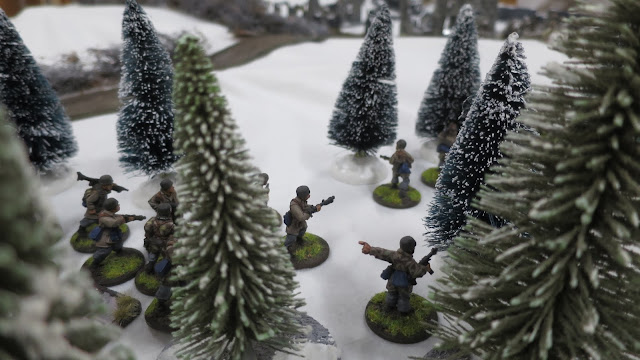 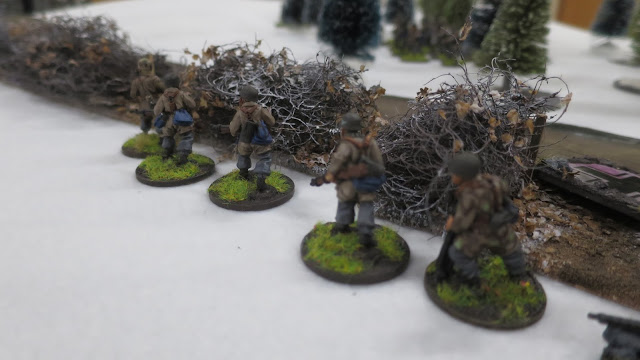 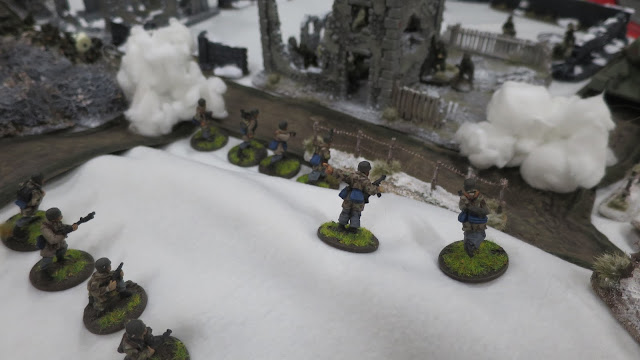 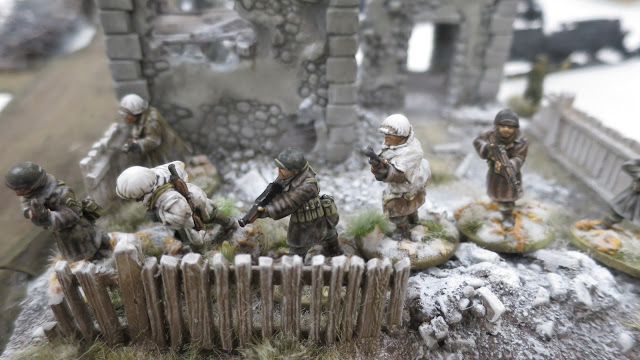 After a week of furious painting I have finally managed to finish all the Zombies Carl asked me to paint for Zombicide, and all before the end of Zomtober! I would have to say that although it has been quite a mammoth task it has been a pleasure too as the Zombicide figures are just lovely to paint. Carl likes his zeds extra gory, and so I have obliged him with as much gore as I could. I think that the over all effect when they are all shambling about is quite stunning.

As ever zomtober has been a great success and I have really enjoyed seeing what other zombie wargamers have done throughout the month.  I am already planning Zomtober 2016!

Anyway, without more of ado, here are the last of Carl's zombies are in their gory shamblyness... 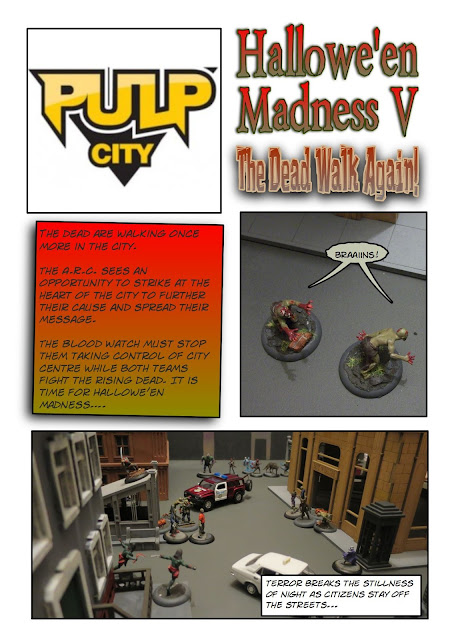 VBCW: The Defence of Dorstone!

I joined Giles and JP for a VBCW game in Hereford  last week. It was a Big Game in every sense of the word with fifteen players, including some old familiar faces and even a few new ones.

I was fighting with Lord Robert Grover, nephew and heir apparent to the Duke or Farnham, for the Royalist Course. My fellow Royalist JP found himself besieged in the rural village of Dorstone by the dastardly brigand Sir Gilbert and his hired thugs, along with their depraved Anarchist allies.

Sir Gilbert, devious rogue and reputed head of a huge smuggling and organised crime network, needed to capture Dorstone to allow him unrestricted access into the heart of Herefordshire. JP's men had barricade their village and prepared to resist until relieved by Lord Robert Grover. Lord Robert's men were to enter from the East, over the hills and fields (which made my decision to bring armoured cars instead of a tracked light tank a bit foolish as they could hardly mover in the muddy English fields).


Sir Gilbert's attempts to drive JP's Dorstone Royalists from the barricade were partially successful, and in the last turn of the game he managed to get four men over the defences, but for the most part his force was spent, and his casualties had been high. In contrast Lord Robert's casualties had been light and he was poised to retake the barricades with ease. The Anarchist had proved they lacked the moral fibre to go toe to toe with brave English Royalist and had sulked in the hedges and orchards. Their casualties were low too, and had they have tied a more offensive tactic then they might have been able to push the Royalists harder.  In the end we decided it was a draw, as Sir Gilbert lacked the men to hold the village and push home the attack, by the Royalists were by no means successful in driving off the attackers, and indeed JP's force was significantly depleted. Lord Robert's platoon suffered a total of ten casualties, mostly groundsmen and Royalist soldiers. The most tragic loss was Cornet Albert 'Binko' Binksley who was killed by a mortar shall while acting as a liaison with the Royalist defenders of Dorstone. He was just eighteen years old.