Although it might seem a bit out of the blue, I have, for some time, been preparing to do a campaign set in Burma during World War 2. Most of the WW2 games I have seen are focused on Normandy, as if that was the sum total of WW2, but there were many other theatres of war.
I picked Burma for a number of reasons. The first was pragmatic, because I was offered a chance to buy a lot of Chindits for next to nothing and I jumped at the chance because they were lovely models. I have to confess that when I bought them I had no idea what the Chindits even were. The more I read about the brave men who fought the Japanese in the jungles of Burma, the more I knew I wanted to honour them by painting a whole load of them.
My Father-in-Law served in Burma, although as a RAF radio operator he was in the rear echelons  so was spared much of the hardship of the troops fighting in the jungle. Never the less, that personal connection with the campaign made me want to represent it even more.
Finally, I bought the Bolt Action rules, mostly to see if it would be any good for VBCW, and liked the look of the game. I have never really done a true historic wargame before, so I wanted to do it right- cue lots of reading around the topic and research- not least form the Ospray books.
Now Mr Pulp Citizen, my regular gaming buddy, and I have always had an agreement we call "You paint it, and I will game it." meaning that if one of us is interested in a period or game, if we paint both sides in the conflict, then the other will game it. Now Pulp Citizen has little or no interest in historic gaming, WW2 or Burma, but in accordance to our agreement, he has consented to play the game when I get the figures  and scenery together. 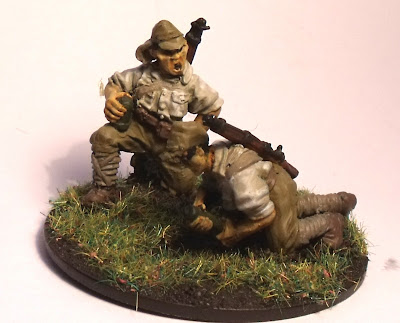 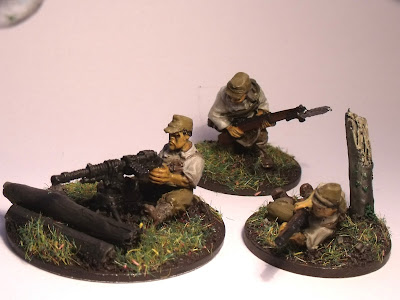 The Anglo-Danish thane has called the levy to arms. From all across his lands the common men gather, ready to defend their homes from the marauding Viking raiders.
This is the start of the next unit for my Anglo-Danish SAGA army- a levy of twelve bowmen. These figures are generic dark ages and first crusade era archers form Black Tree Designs  I picked them up in one of their wonderful 50% off sales. Cheep as chips an lovely models to paint. I have opted for dowdy greys and greens to make them stand out from their betters. 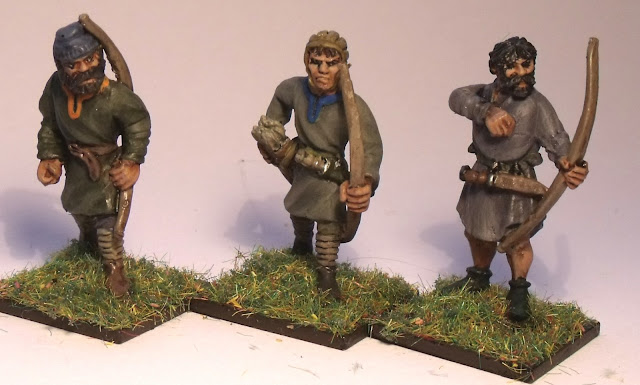 Today I attended another 1938 Very British Civil War Big Game, hosted by the excellent chaps Giles and JP. This was the second such event, and the Battle Report of the previous one can be found here.

Here a battle report and a pile of photos of some really nice armies. I had a great time, and it was great to see everyone- some new faces and some old friends.

Ledbury, in Herefordshire has been a thorn in the side of the government forces since their aborted attack on it- the so-called Battle of Ledbury (hence forth known as the First Battle of Ledbury). The Government has determined that retaking the town was a high priority in order to increase stability in the county.

On the morning of the battle the force of the Government forces drew up, ready to attack the Anglican held town. The attack was to commence on two fronts, with the first being carried out by a large force of highly mobile mounted cavalry troops, supported by artillery, two tanks and a number of motorised infantry in trucks. A significant force of seasoned South African colonial troops added backbone to the assault.

They were attacking against a portion of the town held by Anglican League troops, supported by Socialist Militia from Birmingham (that's me!). The Anglicans had an antiquated Great War era tank, and an armoured truck, while the Socialists had a pair of Trachanka armoured cars.


In addition, the Government forces were attacking on a second front, sending a strong force of British Union of Fascist troops, and Royalist Army troops against a section of the town sparsely defended by an Anglican Force.

The attack began badly for the Anglicans and Socialists; The Government forces seemed to have solid information about their battle plans, while poor communication and misunderstandings hampered their own deployment. Added to this chronic supply problems, and the Socialists found themselves struggling from the outset. When the Platoon Sergeant’s car ran out of petrol blocking an important bridge, it through the Socialist Battle plan into disarray as troops attempted to carry out their battle plans without much hope of success.

The Government forces cavalry deployed rapidly across the fields, crossing with ease terrain that would have hampered vehicles and infantry. Luckily for the Anglicans the Government artillery was less effective, being hampered by poor deployment.

The BUF tanks struggled to breach the hedgerows and ford the river, but when they eventually did there was little the Anglicans and Royalist could do against it, as their own guns were ineffective against the enemy armour. At this point the Socialist withdrew in good order to a line of prepared defences and trenches, and awaited the Government attack.

Government casualties would almost certainly have been high, if at that moment news had not reached the Anglicans and Socialists that the battle for Ledbury was over.  The Anglican forces on the other front had crumbled before the onslaught of the BUF and Royalist. The forces of the Government were pouring into the town through the breach, and the defenders had effectively been encircled!

The Socialist commanding officer was Professor Winters, a History scholar who studied medieval warfare. Knowing that his forces were trapped, Professor Winters decided that he had to try to break out and leave the Anglicans to their fate. He ordered his troops to gather in one place, abandon their vehicles and make their way on foot across the fields. The trachankas were to provide a rear-guard as far as the river.

BUF heavy cavalry and a force of South African Regulars blocked the Socialists path. Professor Winters saw an opportunity to test a theory he had been harbouring for some time: How bayonet armed man can emulate late medieval pike men to defeat cavalry. Ordering his troops to fix bayonets and leave the safety of their entrenched positions, he had them race towards the Government lines. The BUF cavalry responded by eagerly charging into the Socialist, cutting a bloody swathe through their ranks. Initially it looked bleak for the socialists, but as the Professor ordered more men into the melee, the socialist numbers began to tell, and the cavalrymen began to fall one by one.

At this point the South Africans, witnessing what looked like a giant rugby scrum, couldn't resist getting stuck in, and charged into the melee. Despite their best efforts, the fight started to turn in favour of the Socialists, even though there were heavy casualties on both sides. It looked like Professor Winters’ theory might prove vindicated, and that the socialists might manage to break out of the encirclement, but then disaster struck: A large body Government forces arrived from Ledbury, completing the trap.

Professor Winters managed to escape by hiding under a bridge until the Government forces had moved off, but his entire force was captured or killed by the Government forces. The Commissars of the Birmingham Socialist Collective have arrested the professor. He had been stripped of his command and faces a trail for incompetence and desertion. Ledbury itself fell, and the Anglicans were in Herefordshire were dealt a stinging defeat.

Lord of the Rings: Bree Folk and Shire Folk

My Eriador based Lord of the Rings army is at a very early stage as yet, but I have begun by painting some models I have had hanging around for ages while I wait for the new ones I have order to arrive.

Basically, I am basing my army on the common middle-men dwelling in and around the village of Bree, in Eriador. The folk of Bree lack the noble linage and ancient blood of the men of Gondor. They can be brave, ignorant, or even foolish. They are, in short, just men: and yet their village has endured for centuries, even when their noble rulers in Arnor fell before the force of Angmar.

Basing my army on the imagery of Bree from the Peter Jackson films, I have been souring the net for likely looking miniatures that will scale well with existing Games Workshop Lord of the Rings range. 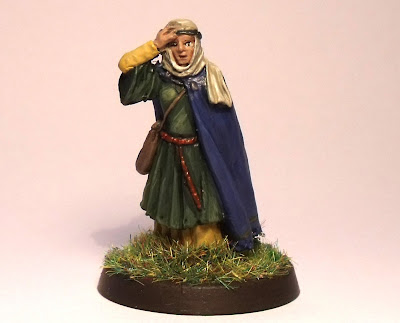 This is the first of my Bree-folk, a villager. The model is by Perry Miniatures  in their crusades range, and as Michael and Allen Perry sculpted a lot of the GW Lord of the Rings figures (well the better ones anyway) it is little surprise to find out she scales really well. 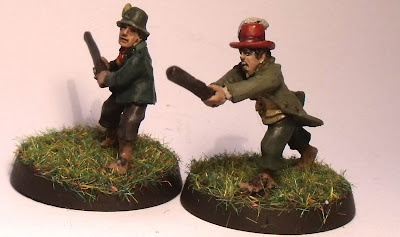 There are a few hobbit dwelling in Bree, but most of their folk live in the Shire, just to the west of Bree. Trade between the two is common, and so the inclusion of a handful of 'halflings' in the Bree army is not unreasonable. These ones are borderers, the closest thing the shire has to a standing force. 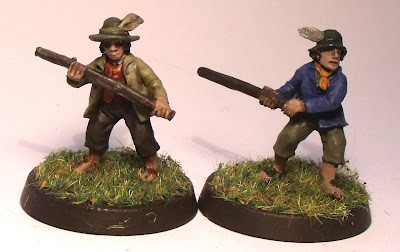 Following the success of the crashed black hawk I have felt inspired to finally finish some scenery pieces I have had kicking around for ages. I don’t know what it is about painting scenery, but I always seem to shy away from it, even when it is in an advanced stage of completeness. However, when I actually start paining it, I always find it a welcome change of pace, and am generally satisfied by the results.

This lot of scenery are from Games Worksop, for their Lord of the Rings game, and are called the Ruins of Osgilioth. Inspired in part by the Hobbit film, and because my son Charlie got a lot of Hobbit figures for Christmas- but also by Doom Hippy’s campaign (chronicled on the Lead Adventure Forum, click here for a link)- I am right back in a Lord of the Rings mood.  As I already have a Shire army (army- not sure that is the right word- disgruntled mob might be closer to the mark) I thought I would expand on this idea and make my own army up that covers the Shire and Bree-land. Mostly middle-men and hobbits, with a few Dunadain rangers to add a bit of back bone. 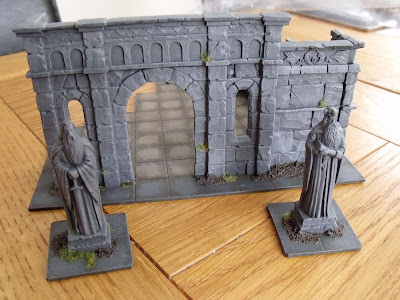 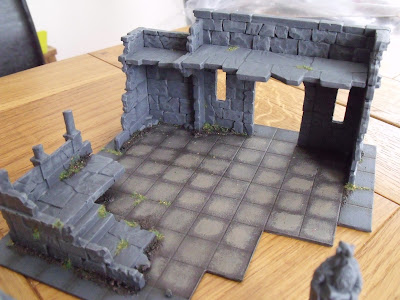 With that plan in mind have painted my ruins as the ruins of a villa in the wilderness of Eriador. No doubt it was once the home of a Dunadain lord, sacked by the unspeakable hordes of Angmar in centuries past. Hewn from the same grey granite as the Watchtower of Amon Sul, known the Men of Bree as Weathertop, these ruins must have been majestic and imposing once upon a time. Now they are desolate and foreboding, the haunt of who-knows-what. 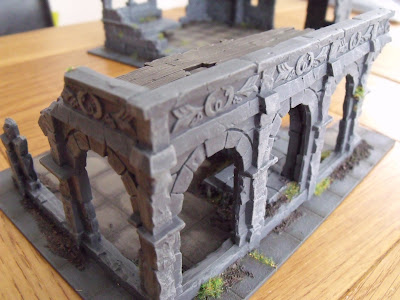 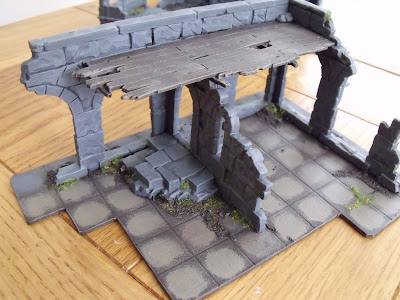 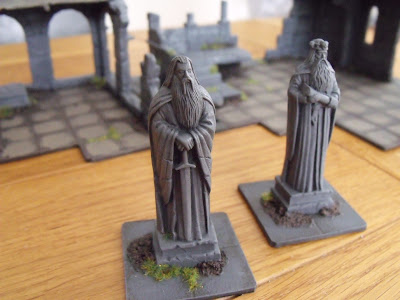