In order to get a fighting force ready for sharp practice I have decided to try something I have never even contemplated before: Buying painted figures on eBay.  After reading an article in Wargames Illustrated on repainting figures bought on eBay, I realised that it might speed things up considerably. I began to scour the store for a bargain, and stumbled on these- some nearly-completely-finished French infantry- obviously someone started the project and ran out of steam before finishing it (that would never happen to me I assure you! lol). From what I could make out in the photo they looked like they had been painted in a similar style to my own.
And how much did I pay for this little lot? £38 for 36 Crusader Miniatures. Which is less than I would have paid for them unpainted from the Crusader miniatures store. 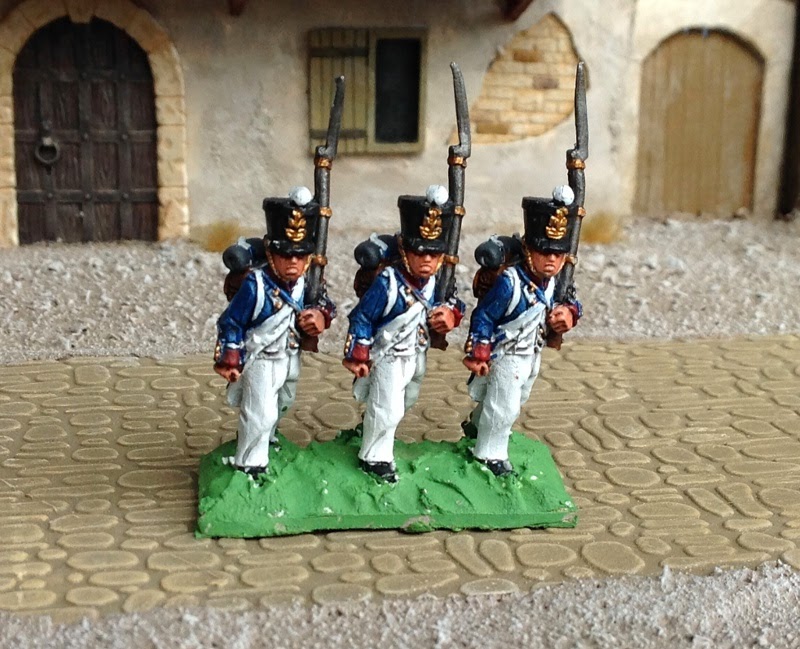 This is how they arrived- all well packed in card- all in good condition except for a few chips of paint- and all based on card with plaster filler round their integral bases.
Crusader miniatures are a bit shorter and a bit chunkier than the Victrix ones I have been painting for the British, but not so much that they look stupid. And for that price...
First things first I had to take them off their bases- mercifully this proved very easy- and once I had scraped off most of the excess plaster then I could stick them to my bases and 'sand' them so they match my British. 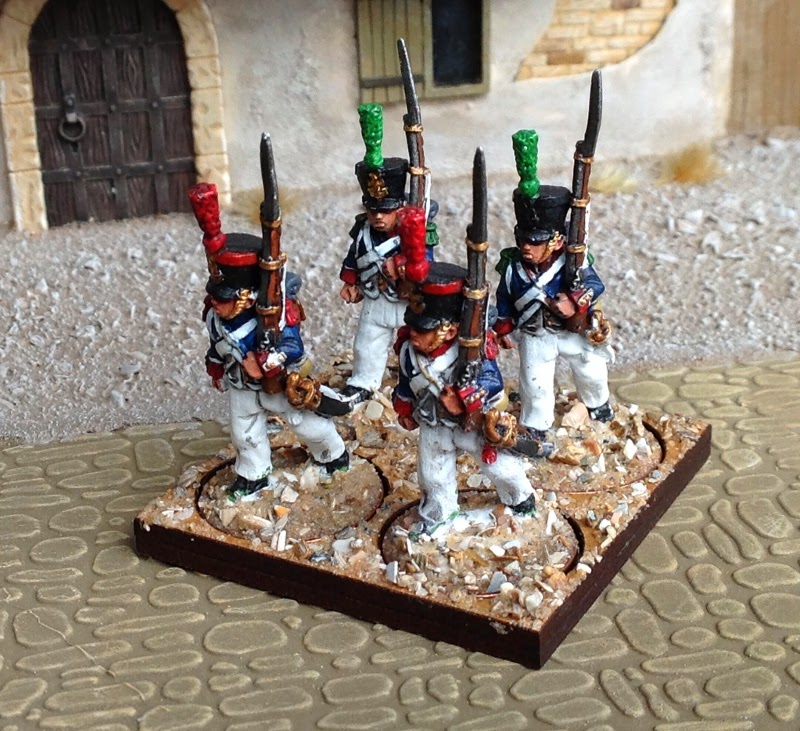 These ones are some Elite infantry that I have just re-based but not painted yet- the previous owner painted them as a mix of Light Infantry and Grenadiers, but I will be painting them as a single unit of grenadiers because I like the look  of light infantry in skirmishing poses, and grenadiers marching in nice ordered ranks.
So what needed doing? I didn't like the way the previous owner had painted the trousers, and the gun barrels were too shiny, and the faces too dark, but on the whole they just needed touching up a bit.  Here they are after their treatment... 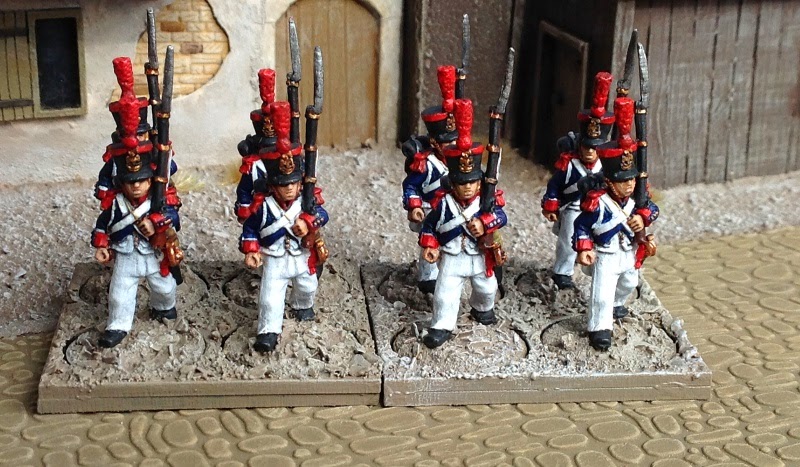 And here they are- two stands of Grenadiers for my French army- and was it quicker than painting them from scratch? Well, I managed to paint each stand of four in a single evening, and for the British I was pleased to be getting five models per week. And when you take into account the time it would have took to de-flash, remove mould lines and spray them up I think they represent a considerable saving in time and money.
Posted by Rob Bresnen at 14:43 2 comments:

I have finally finished my Backdrop for my Peninsular War
Napoleonics- It took a lot longer than I had initially imagined, but I think it was worth the effort.
I was so excited I snapped of a few photos with some of my British army and sailors- just to see what it looked like- the lighting was very poor, so you will have to use you imagination a bit.
The British Army are Victrix, and the sailor is from Brigade Games in america- but sculpted by our own Paul Hicks. 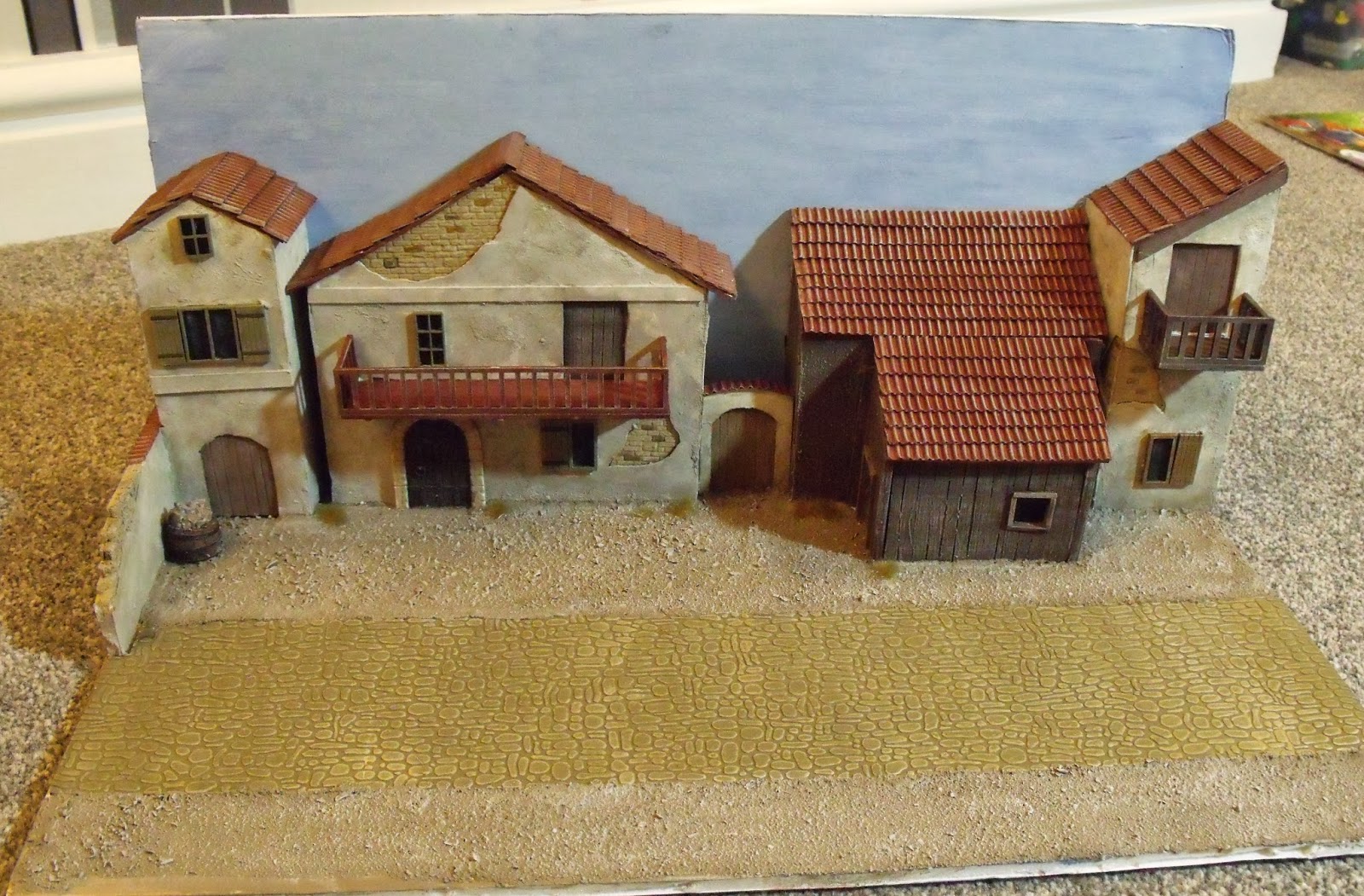 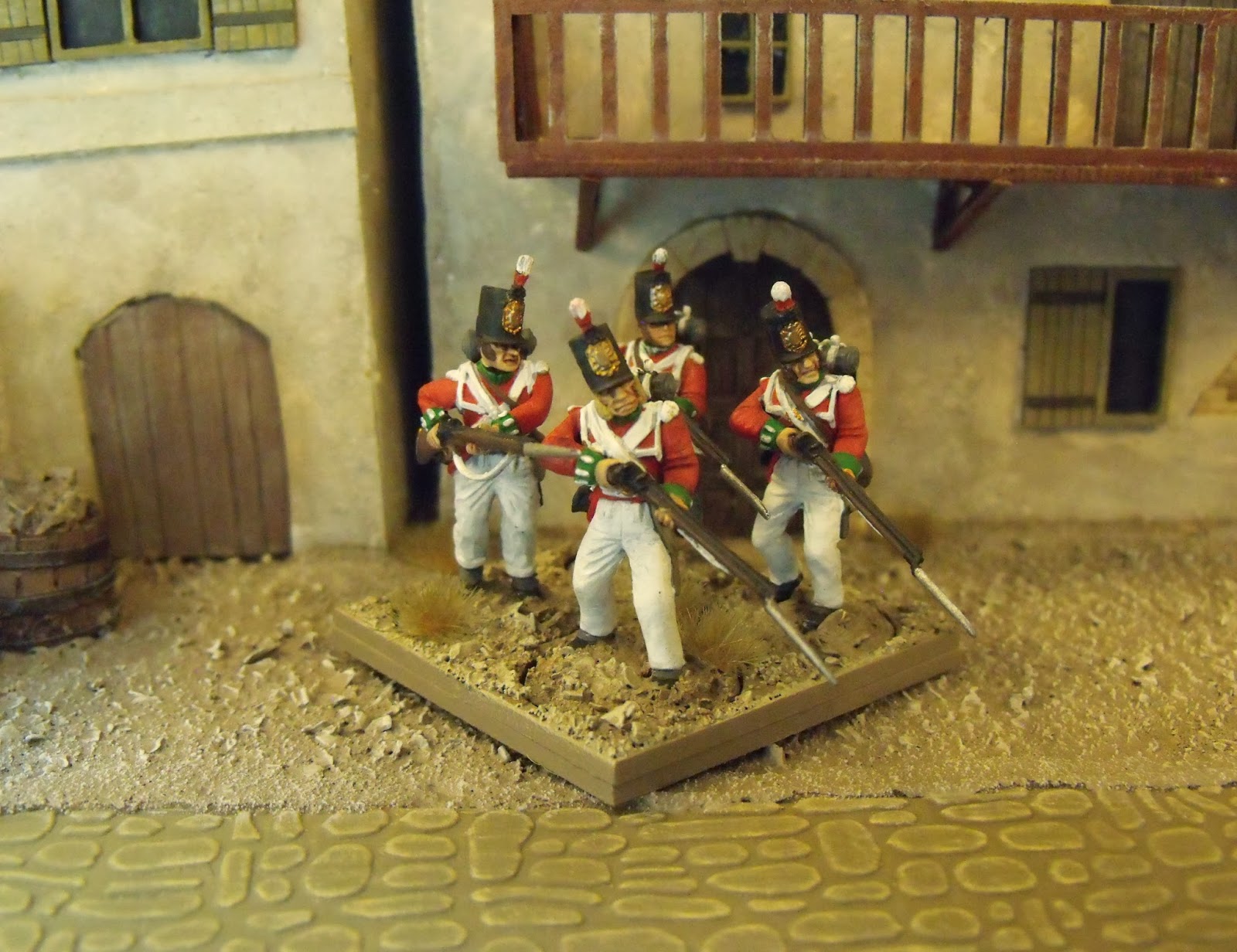 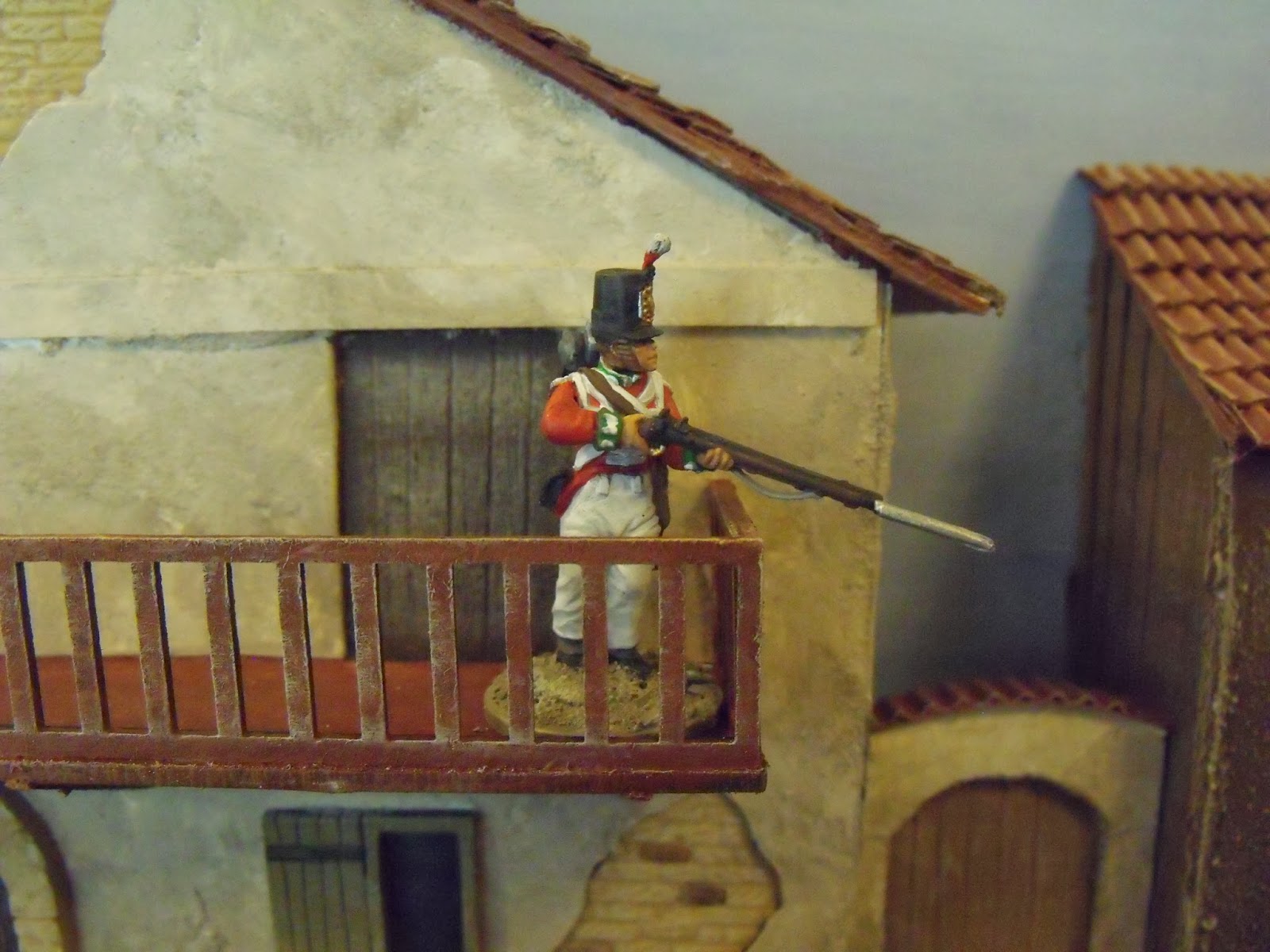 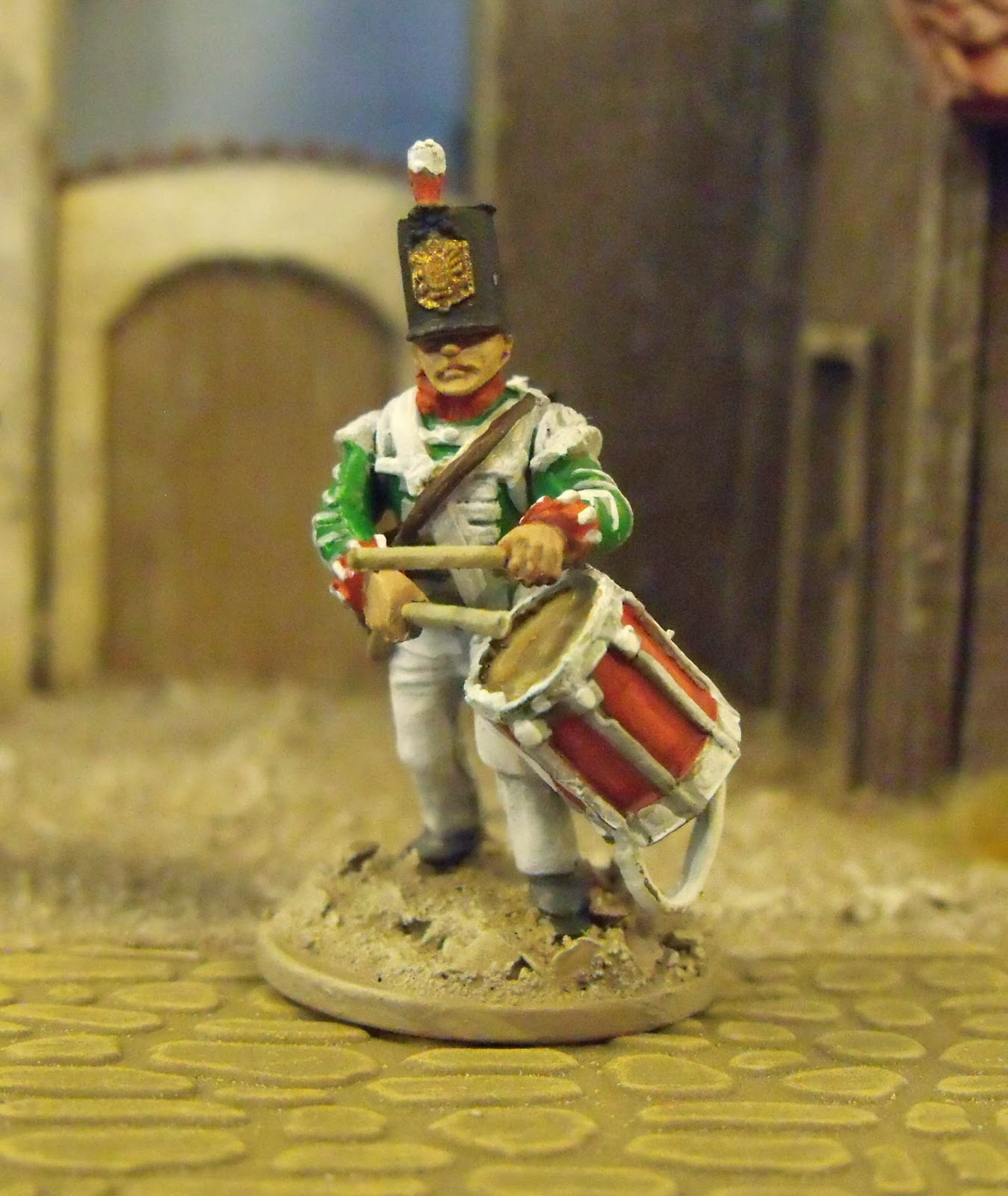 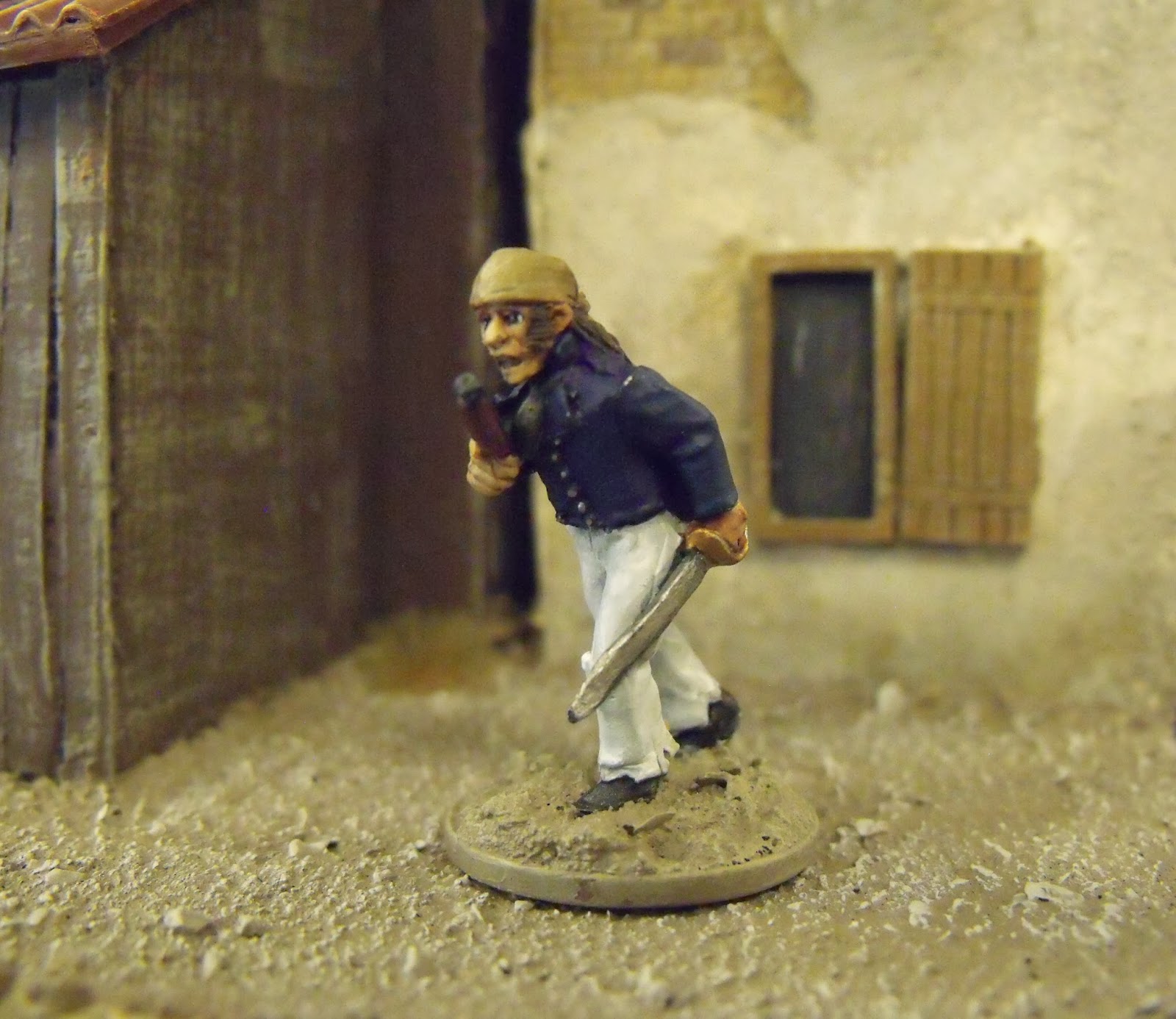 At the moment I am jolly busy preparing for the Lead Painters League compensation, and so I can't show you any of the figures I have been working on for the last few weeks, but I can show you this- it is going to be a back drop for my photos of my Napoleonic Peninsular War figures, and obviously is representing a typical Spanish or Portuguese street scene- It might seem like quite a lot of work to go to (and it is) but I don't have any suitable buildings or terrain for the Iberian Peninsular yet, and if I want my figures to look cool I need something suitable- It's also a good chance for me to practice some scenery making techniques that I will eventually employ to make a whole village for use in the games. 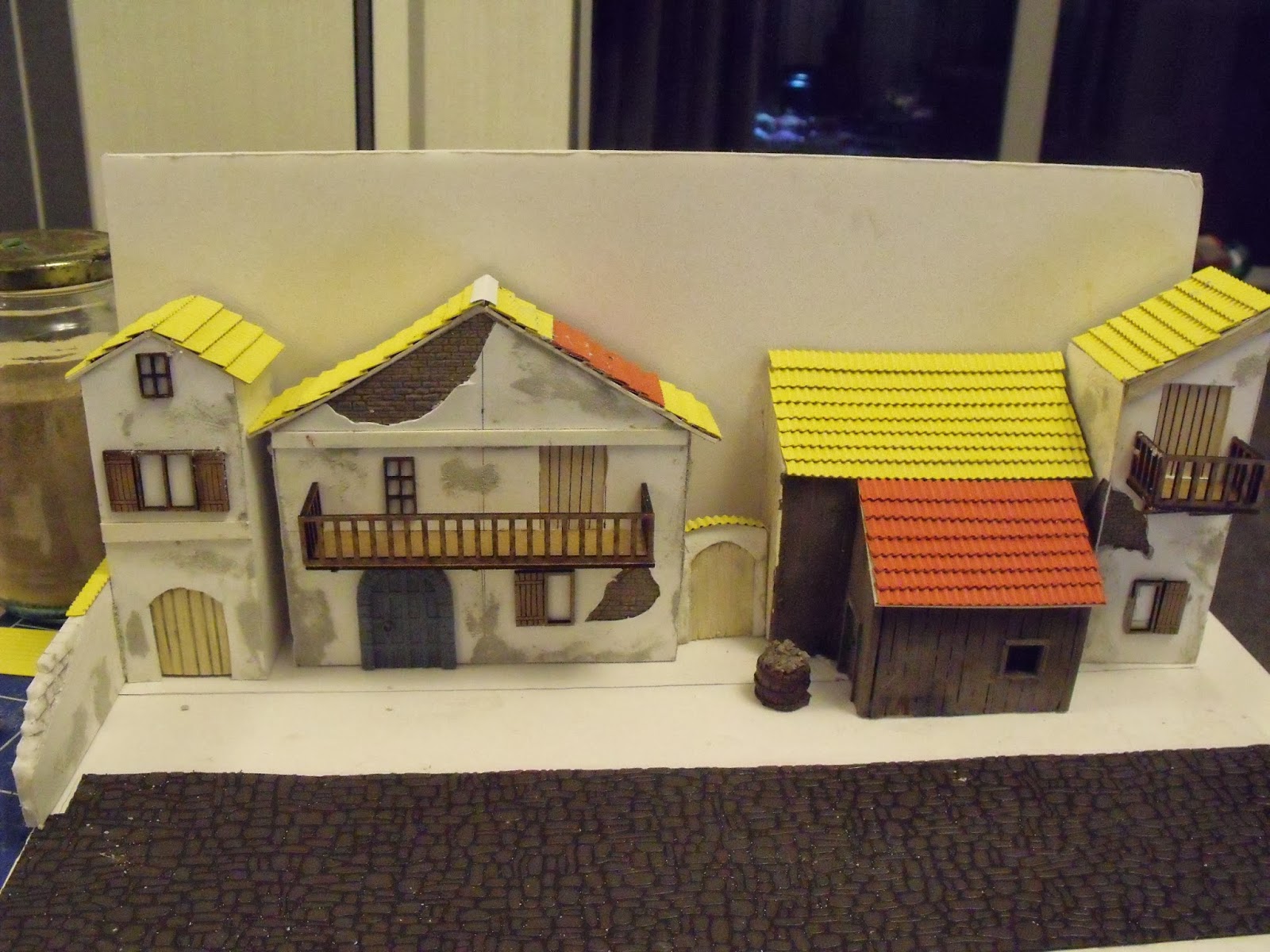 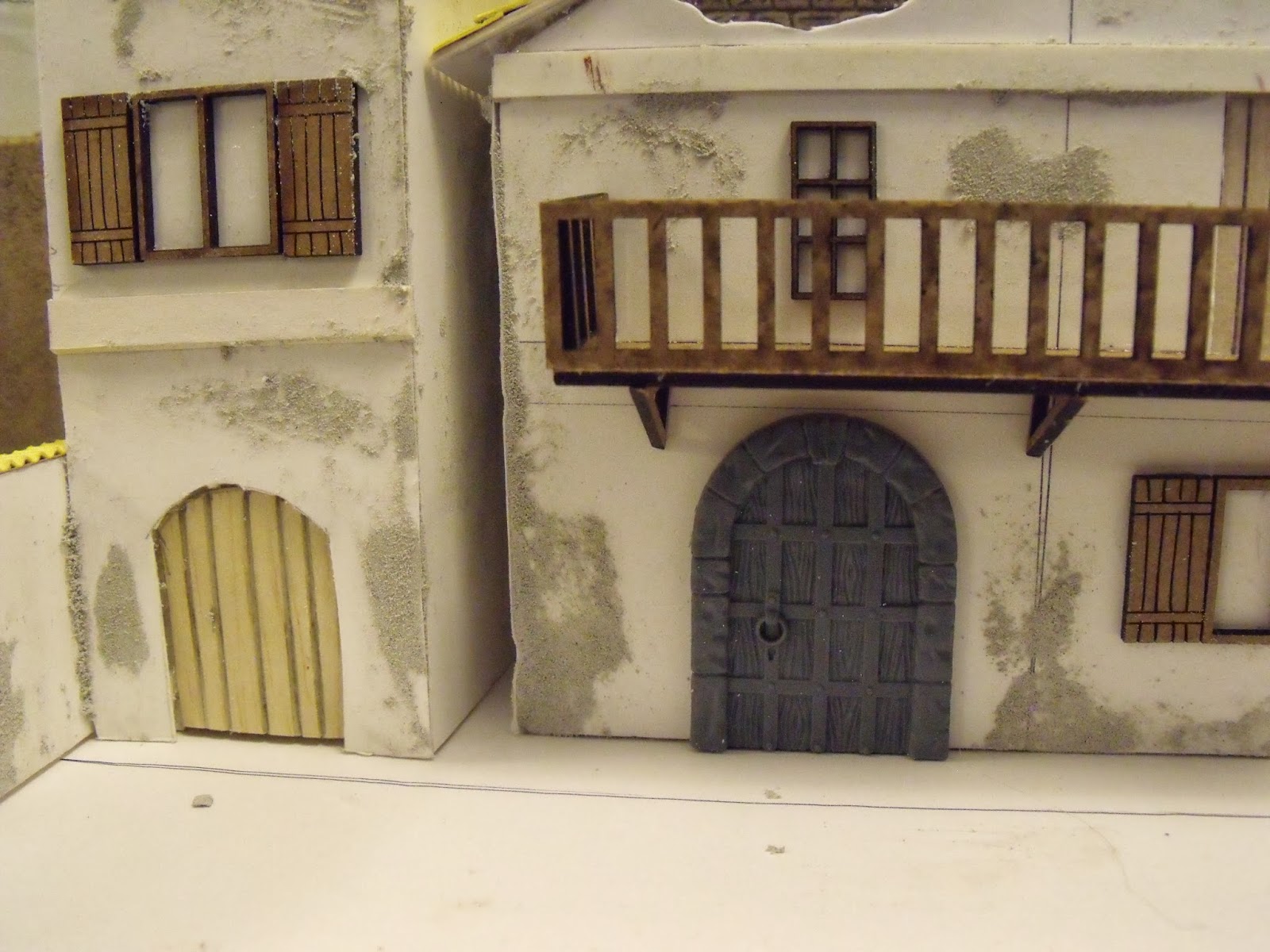 The balcony are laser cut MDF from Warbases- as are the windows and shutters. This plastic door is a left over from the Mighty Fortress. The buildings are foam card, and the barn is made from balsa and part of a broken resin model from TSS I have been meaning to recycle for some time. 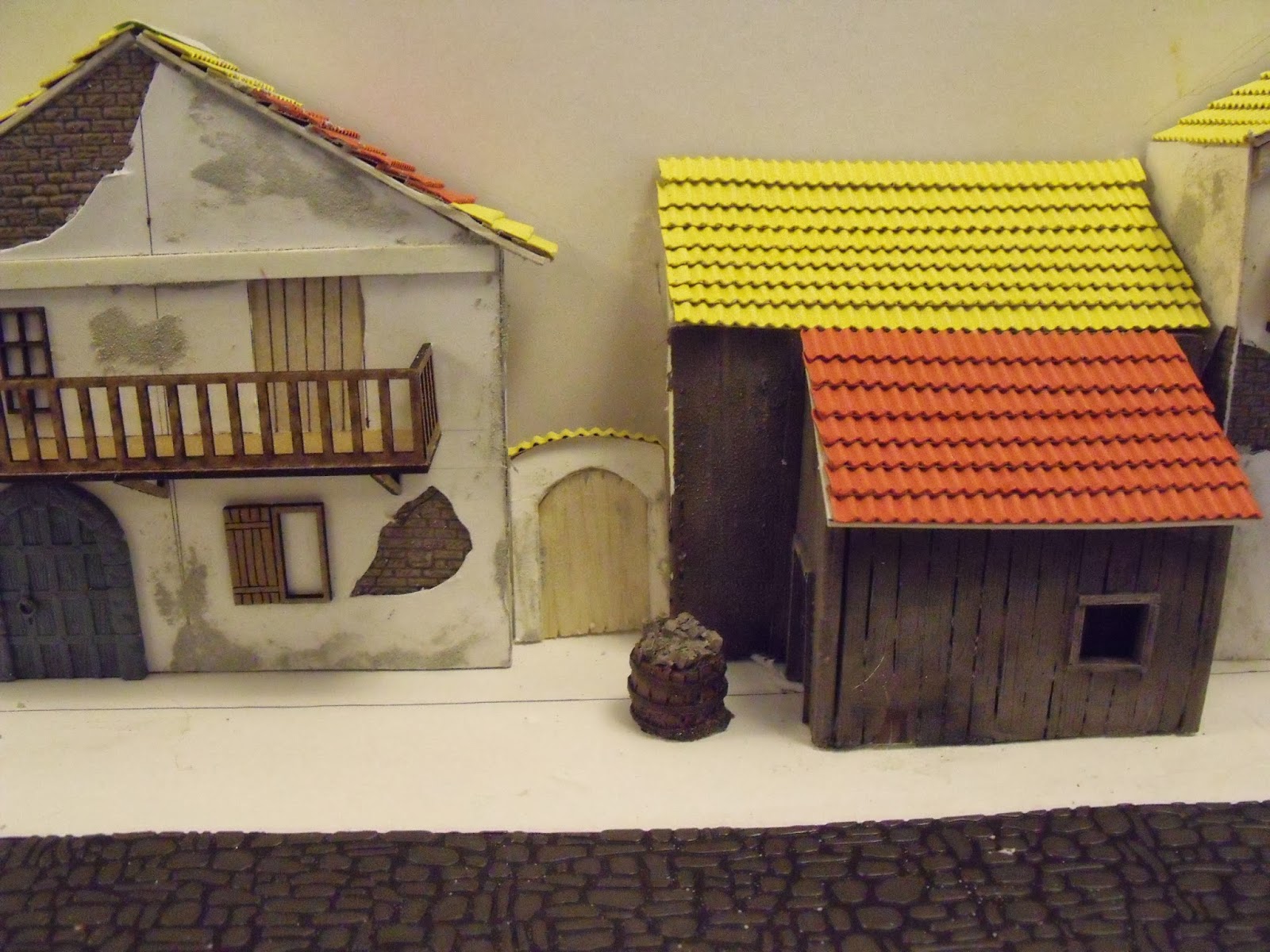 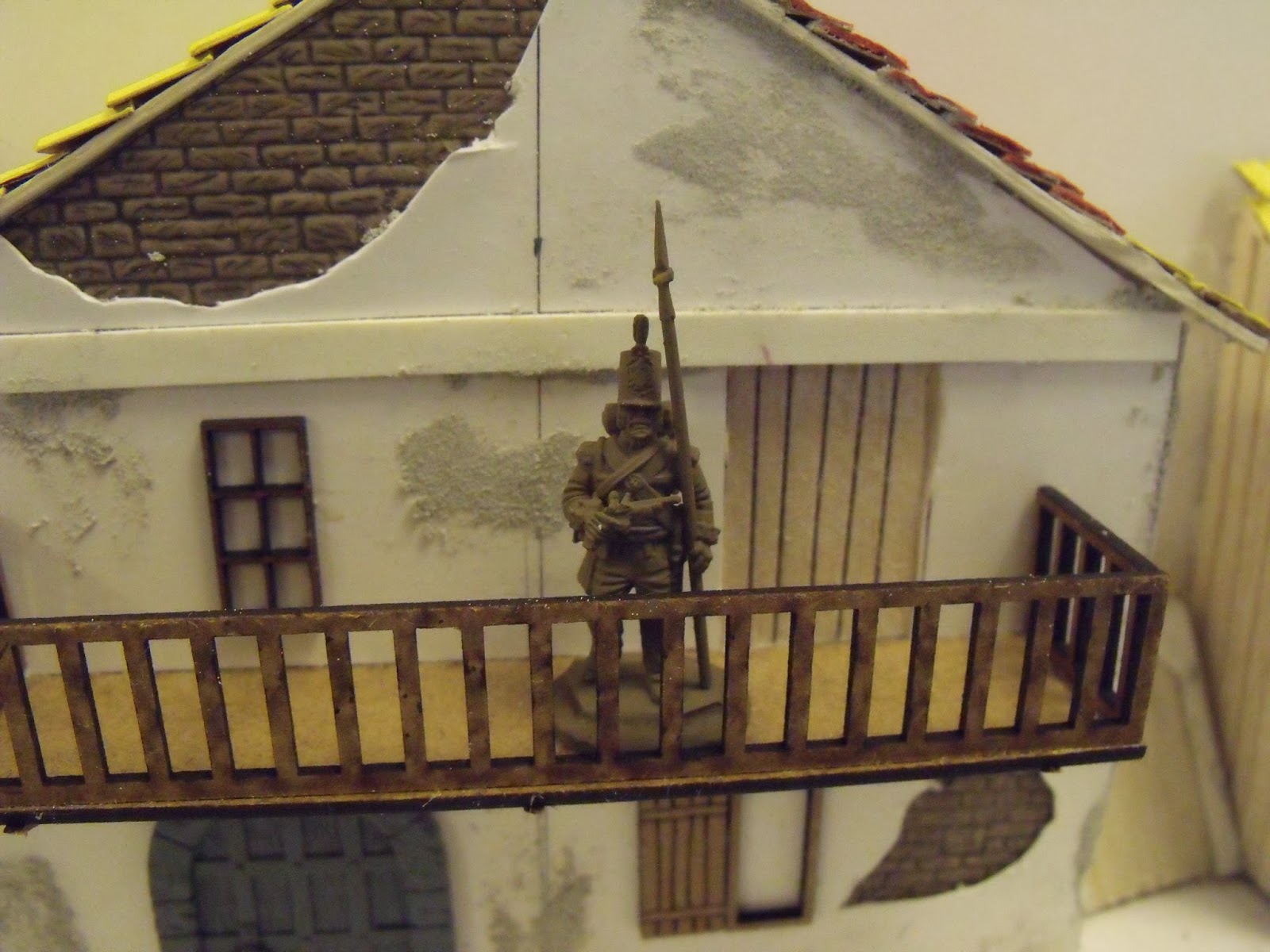 It is a happy chance that I decided to base my Napoleonics on 1p coins not 2p, so that they can rank up together in close order- because the 1p coins fit onto the balcony really well. 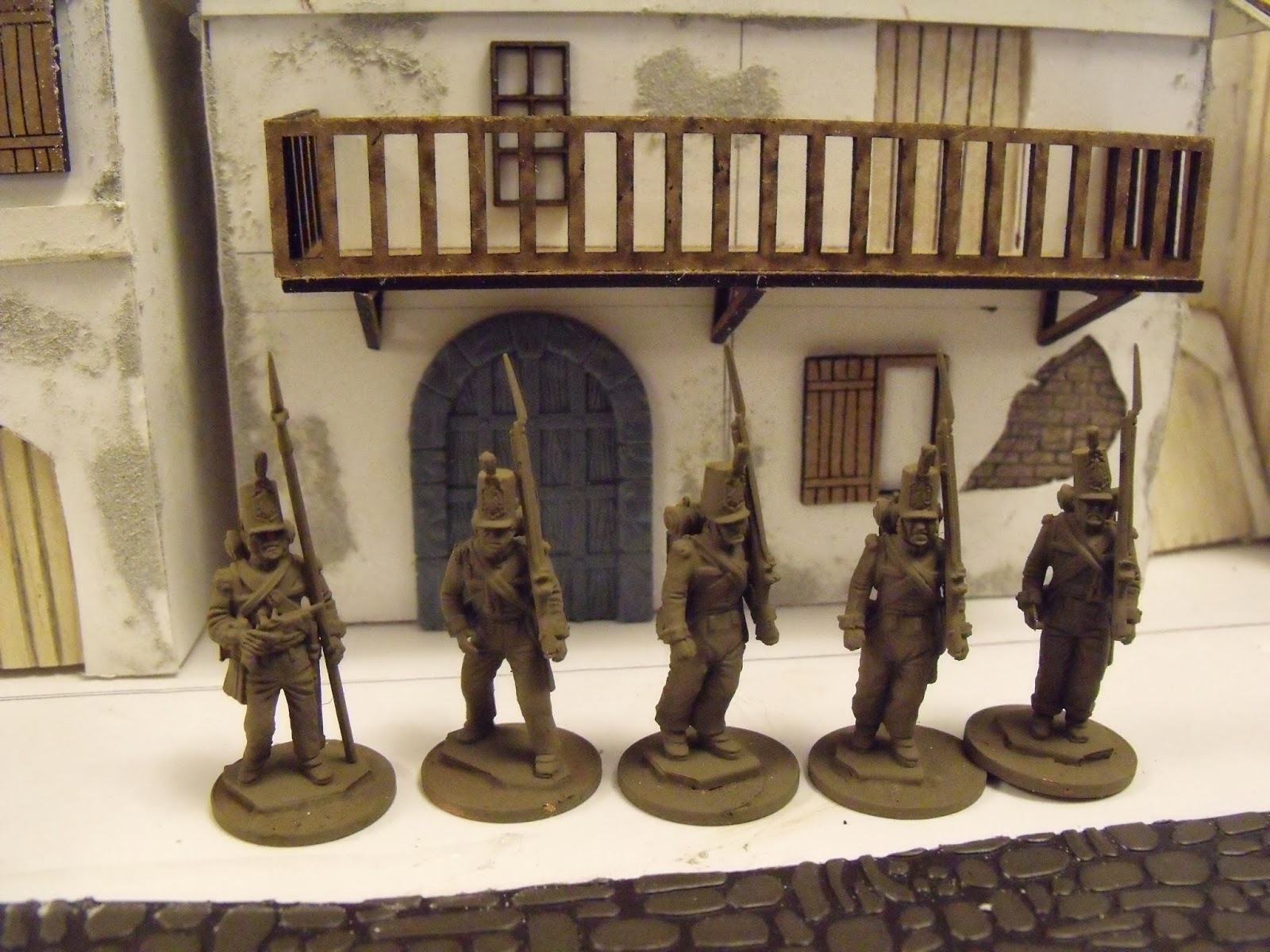 Here you can use you imagination to picture how the back drop will work if was all painted- also not they use of brown undercoat for my Napoleonic range- something of an experiment- and I like the way it is working out.

I'll post pictures when it is done- That is allowed win the LPL rules.
Posted by Rob Bresnen at 15:50 4 comments:

As promised here or a few photos of the AWI game they played at Earlswood Wargamers last week. I didn't participate in this game, as I was busy playing Dead Man's Hand on another table, but it looked to good not to snap some shots to share with you guys.

They were using a ACW rules called Brother against Brother, which, with a few minor changes is ideal for AWI and FIW. In the game a French/American column has been ambushed by the British and their Native American (can we call them Indians?) allies. The French are attempting to cross a narrow bridge to force their way through the ambush.