I have been on the look out for an inexpensive way to represent industrial towns like Ellesmere Port and Birkenhead in my VBCW games. Warbases make one in MDF, but I need loads- enough for a 2 foot by 4 fot are at least, and the cost of the Warbases models is just too much for what I had in mind. To solve this problem I ordered ModelBuilder by Evan Models form America. ModelBuilder is a program that let's you design, print off and build your own buildings.
Here are a couple of pictures of my 28mm scale terrace house prototype. The program is very versatile and can make models in various scales. I have been working on some 15mm buildings for my 15mm Zombie Apocalypse games too. 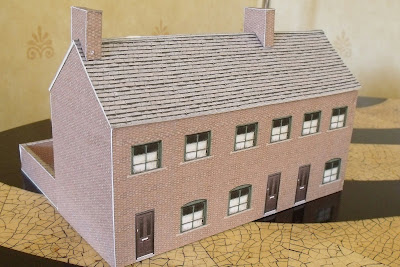 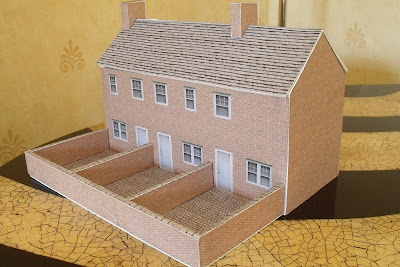 I have been busy making some markers for a secret Halloween project for this blog. At the moment it is so tippty-top secret that I can't let on what we are going to do with them (it's a surprise).
I sculpted them from green stuff and stuck them onto 40 mm resin bases.

Work continues on expanding my Socialist force for 1938: A Very British Civil Was (VBCW for short). This comes ahead of the Big Game 4 to be held in Evesham at the end of October.

In my VBCW game, my force represents the paramilitary forces of the Wirral Socialist Workers Council. The WSW Control most of the Wirral, a peninsular in the North West of England. They are in conflict with the royalist forces based in Chester, and are allied to the besieged Liverpool Free State. The so called 'Chester Front' is a line of trench works and defences across the southern portion of the Wirral, stretching from Whitby to Burton. As yet the Royalists have failed to make significant in roads into the Wirral, instead concentrating the bulk of their forces on besieging Liverpool, while the WSW lack the manpower and resources to push their lines any further. Perhaps all that is about to change. 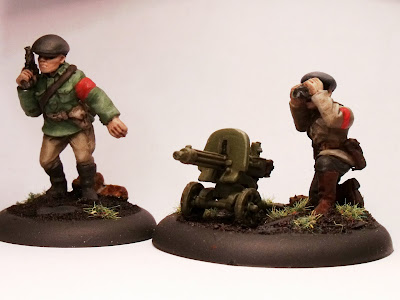 The Maxim HMG is a veteran of a weapon, having seen service in one form or another in every major conflict for the last fifty years. The WSW have recently taken delivery of a handful of these precious weapons from supporters in Russia, via their allies in Liverpool. 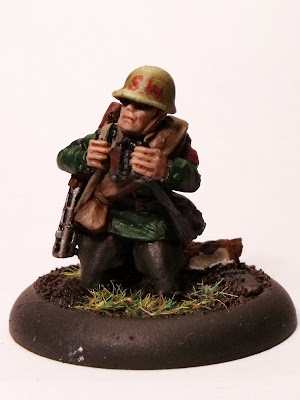 Soviet army instructors have been schooling snipers from Liverpool and the Wirral. In accordance with their doctrine the Sniper Platoon has been reinforced by specially trained 'spotters' armed with PPD35 SMGs (again, thanks to their Russian patrons) 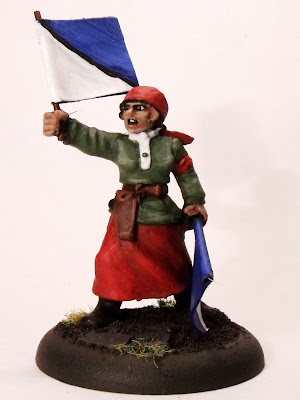 Communication is vital in modern warfare. In 1938 radios are bulky, rare, difficult to maintain and unreliable. It's far better to rely on the tried and tested methods like semaphore, runners, field telephones and alike. This heroine of the socialist movement has been trained in semaphore and attached to the WSW Brigade head quarters. 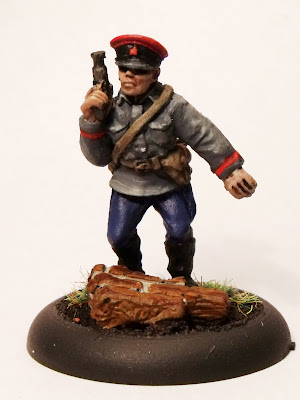 During a civil war moral can be difficult to maintain. To ensure that the Socialist workers of Wirral are following their orders properly the Party has appointed a number of 'Political Officers'.
The political officer and the HMG are by Black Tree Designs (from their NKVD range). I clipped off the top of the gun crew's peaked caps and added a blob of green stuff to make flat caps. The spotter is by Black Tree Designs too, from the Soviet army range. The signalswoman if converted from a Copplstone castings Bolshevik Heroine.
Posted by Rob Bresnen at 09:31 No comments:

Some Sillyness I Have Been Sculpting

Sometimes I get overtaken by odd urges.

These usually come when I have been spending too long looking at other peoples 'greens' (by which, I mean their sculptures for figures, so called because they are usually made from a green putty known as 'green stuff'). When I am overcome by these urges I have to break out my tools and have a go myself.

Unfortunately for me - and fortunately for the countless small companies making miniatures who would be my natural rival, I am not actually very good at sculpting. Unless you have actually given it a go, it is hard to appreciate just how difficult it is, and how much skill is possessed by the men and women who make 28mm figures for us wargamers to enjoy. 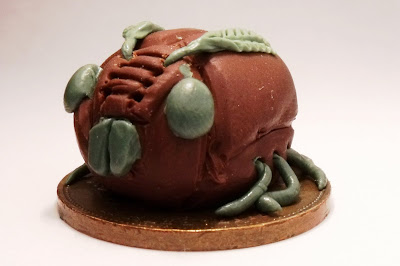 An alien bug-creature, evolved on a low gravity world, where it's tiny tentacle-like legs can shift it's massive bulk. 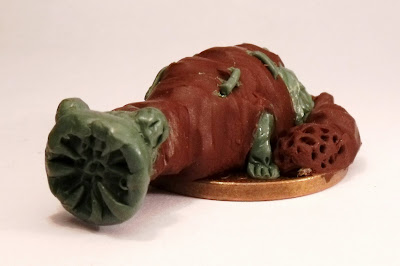 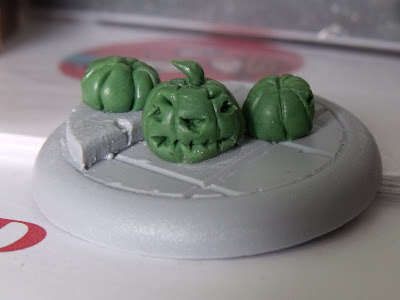 I can't tell you what this is for, it's a surprise!

Last week my old mate Leon and I fought a brutal battle in the dock yards of Pulp City. Leon has made an amazing battle report, in the form of a comic strip- you can see it on his blog 'Pulp Citizen'. It has to be seen to be believed.
Rather than trawl over old ground and report the same battle as Leon here is a couple of pictures of the two teams involved in the battle. All the figures and scenery are Leon's, so I can't take any credit.
I did take the pictures though. 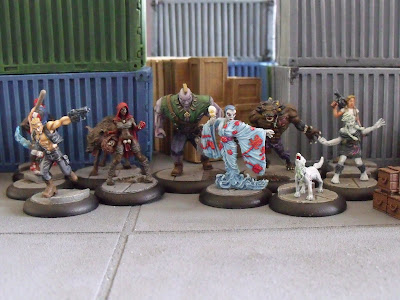 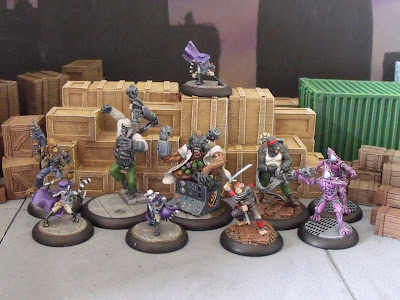 Pop over to Leon's site for his fantastic battle report- not to be missed.

I have been rather busy of late, getting my VBCW brigade ready for the next Big Game in Evesham in October (I will post pictures of some of the new VBCW stuff soon), but I have found time to add a few more zeds to my growing (or should that be groaning?) horde of 15mm zombies from Rebel Miniatures. I think I have got much better at painting them, as I am starting to get used to the smaller scale figures. 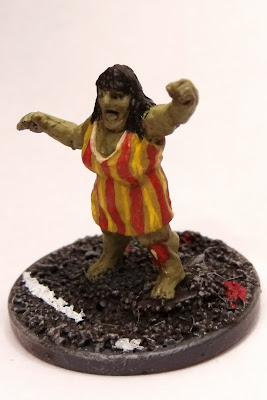 This larger zombie-lady is a stripey summer dress.

The vertical stripes are quite slimming. 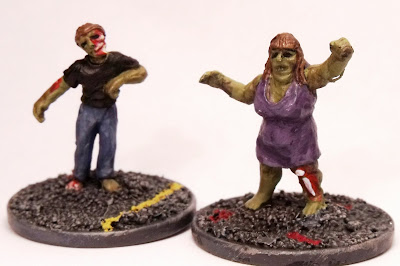 A couple of unfortunates seen at the local mall. 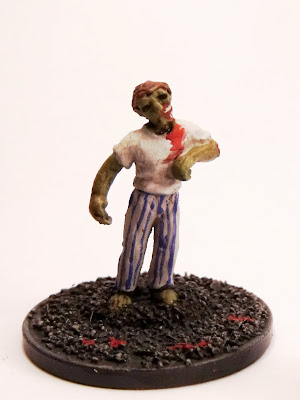 This is my favorite. This victim was still in bed when he was attacked. Mercifully for us he was in his PJ's.

As you can see, these zombies are basically the same model twice over- The pack of zombies has 22 figures in it, with 11 unique sculpts. I bought two packs, so I have four of each figure in my horde. I have been careful to paint them differently, so they stand out as individuals.
Posted by Rob Bresnen at 07:52 1 comment: