Here is something different...I have been working on these since before Christmas and this is the first time I have showed them off. It is a Celtic army for ancient-era wargaming. I intend, when my army is finished, to get some games in at Earslwood. I have gone all out for colour on these guys, unlike the muted shades for the Dark Age Saga figures I painted. They are a combination of Foundry and Crusader miniatures. I want to add a couple more units of spear-men, and a few more skirmishers, as well as some war-dogs and light cavalry. 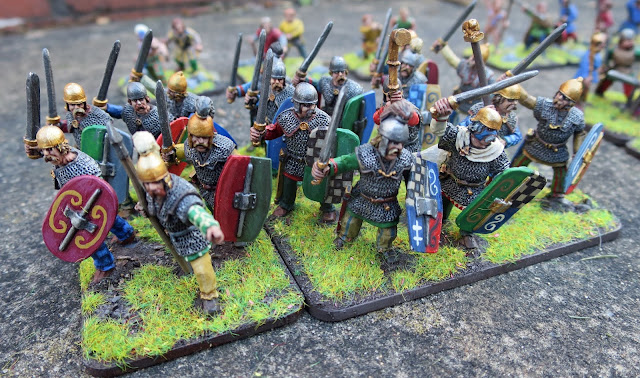 I have added another unit to my Peninsular War skirmish collection- this one is Portuguese Light Infantry (cacadores). Their uniforms and equipment are very similar to the British rifles (which is hardly surprising as they are trained and equipped by the British). Half of them have rifles and the other half still carry muskets. these ones were sculpted by Paul Hicks and originally sold by Victrix. Victrix sold their metal range to Brigade Games in America, and these figures are still available from there. 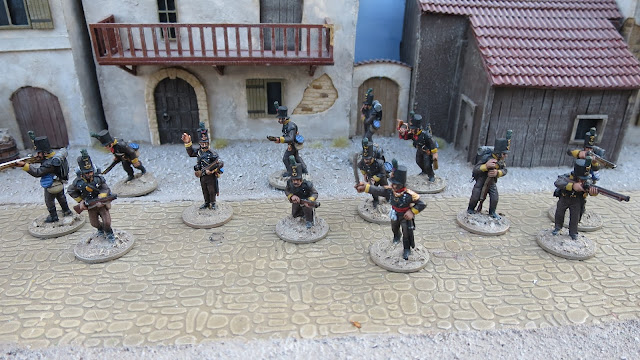 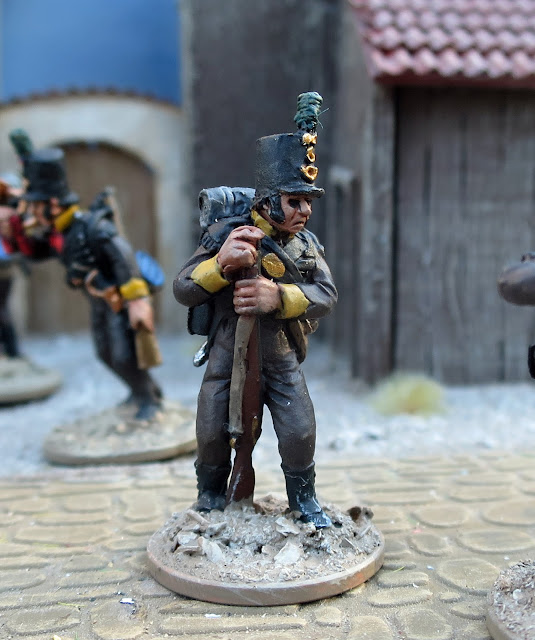 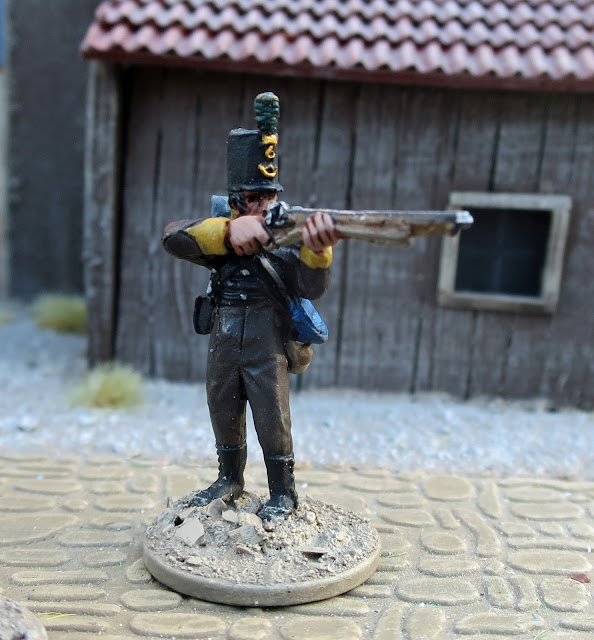 Three more hirelings for my Frostgrave Wizards. The first is an infantryman. He is a GW Militiaman with Frostgrave soldiers arms. 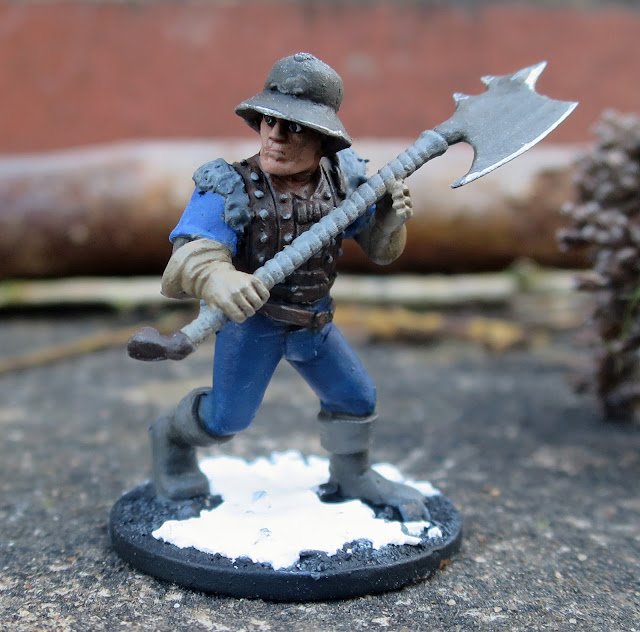 Next is an Apothecary made from a GW Warhammer artilleryman. I added flames to make the fuse into a torch, but otherwise haven't messed about with him much. I don't normally bother painting eyebrows but this guy needed big bushy eyebrows. 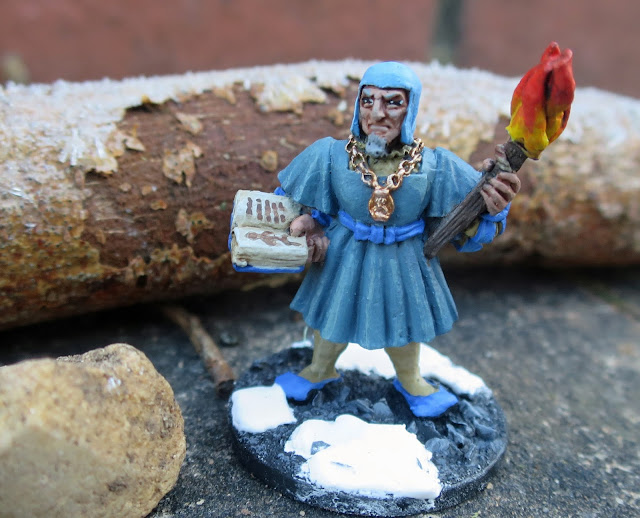 Finally this knight was a leftover from an ancient Celt army I have been working on- he is by Crusader Miniatures and hasn't been converted. 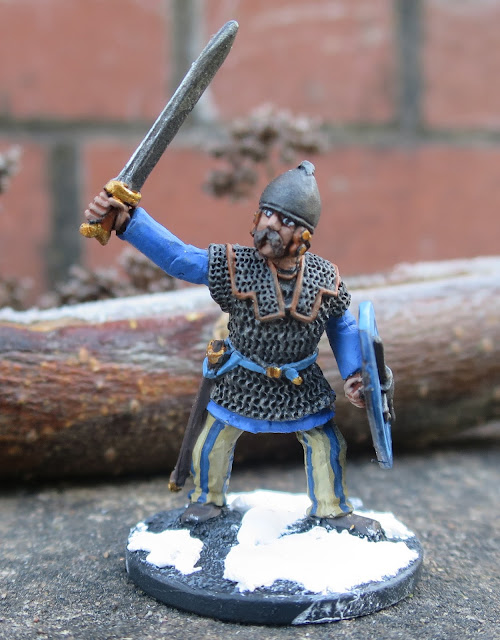 I can't remember where I got this from but it is a sabre-toothed tiger painted up as a Snow Tiger. It could be a proxy for the Snow Leopard in the wandering monsters table, or even serve as an exotic war-dog for a wizard. 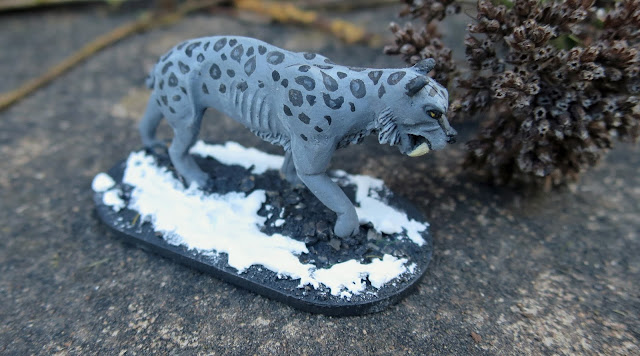 This Frostgrave plastic has a shield taken from a GW Ogre Kingdoms sprue. It is split and has been crudely bolted back together with metals strips. I like to think that this guy used to be a humble thug, but found (or stole) some leather armour and salvaged this broken shield and is trying to hire himself out as a man-at-arms for more money. Good luck to him...it's good to try to better yourself. 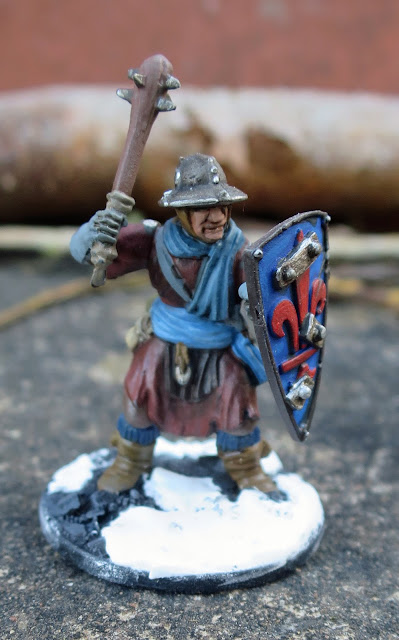 I have just finished work on my two wizards apprentices which means I am ready to start gaming (I know there has been a delay, but I am back on track now!). I hope you like them. 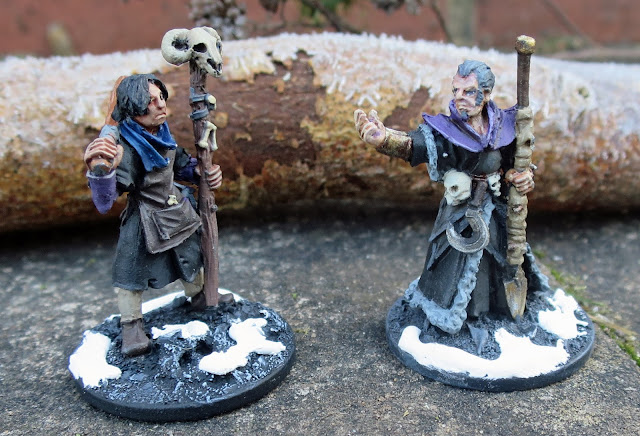 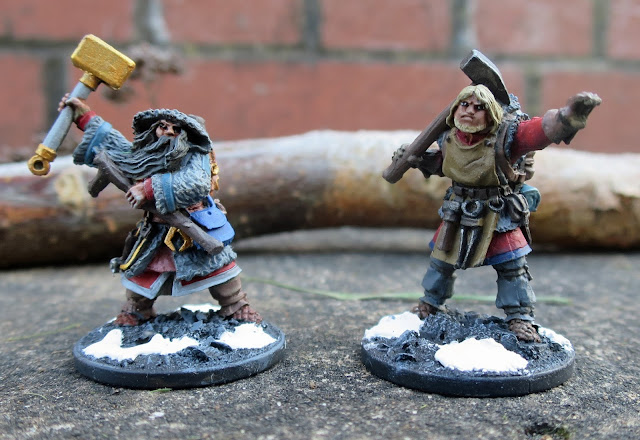 I managed to get a game of Force on Force in at the weekend, down at the Earlswood Wargamers club. I also took some pictures of Big Al's Battle of the Bulge Chain of Command game which I just had to share because the look so nice. I can't take any credit for the WW2 stuff- it's all Al's.

I have posted a full AAR for the Force on Force game over on my other Blog (Hotel Zugando), if you want to pop over and see even more photos and read about the action. 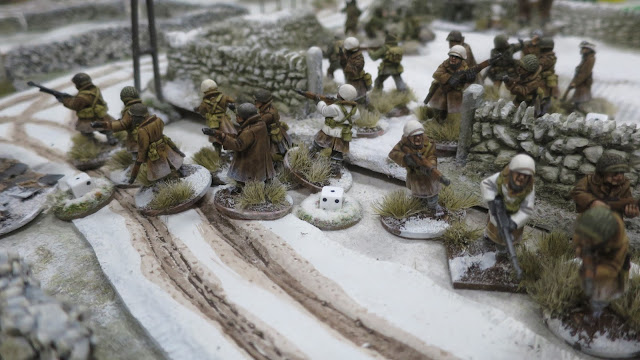 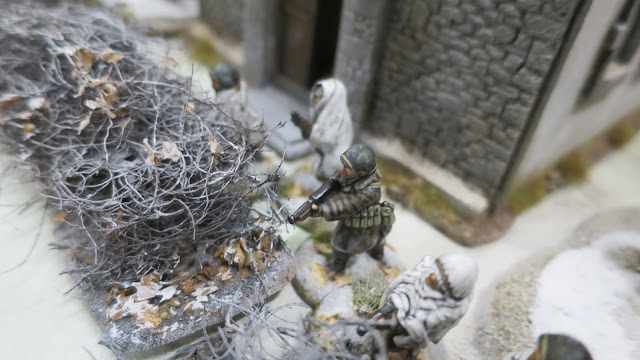 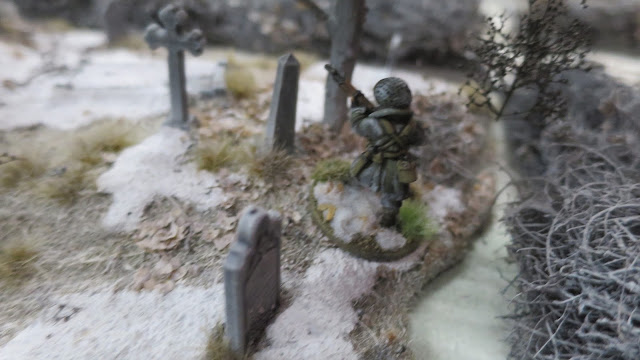 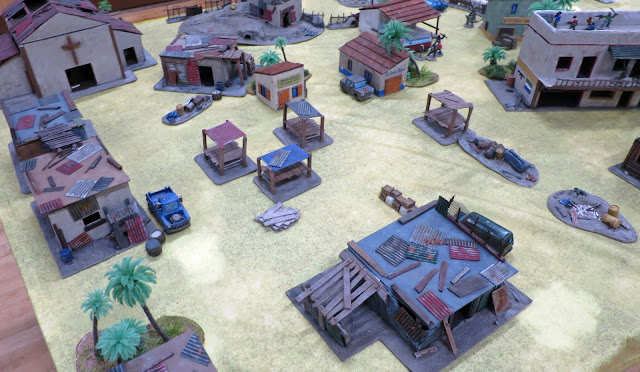 I have finished two more larger compounds for my adobe village. The top one used two of my old adobe buildings re-created with the addition of a compound wall and a new staircase. The second complex featured a larger building I bought on ebay, with a small outbuilding or workshop. I put a new door on this building (and used the old door on the inside) to make it tie in better with my other buildings. This one and has lift-off roofs. I also decided to paint the interior and added Persian rugs on the floor just for fun. I printed these of the internet, and resized them with Word.

Next- A mosque and perhaps some shops. 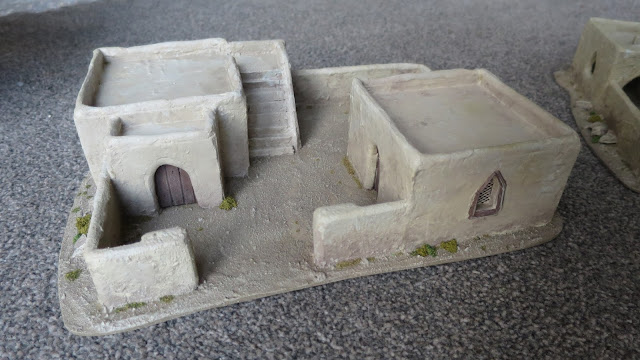 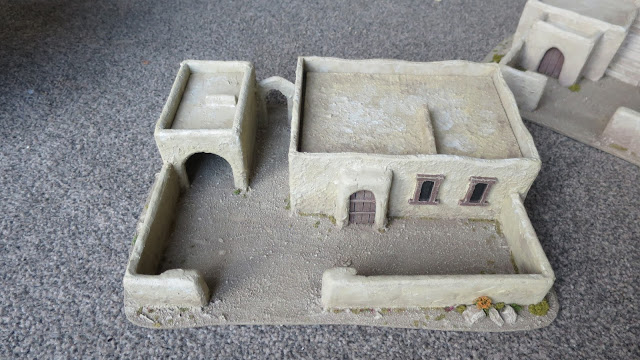 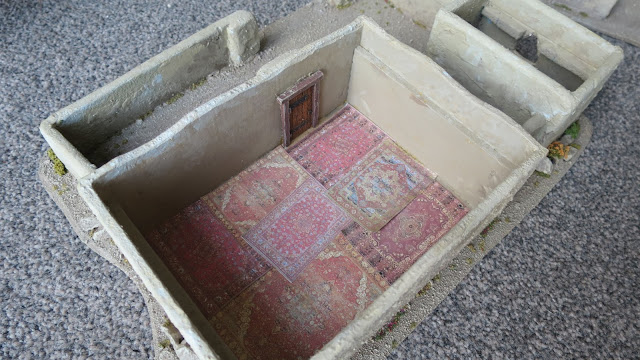 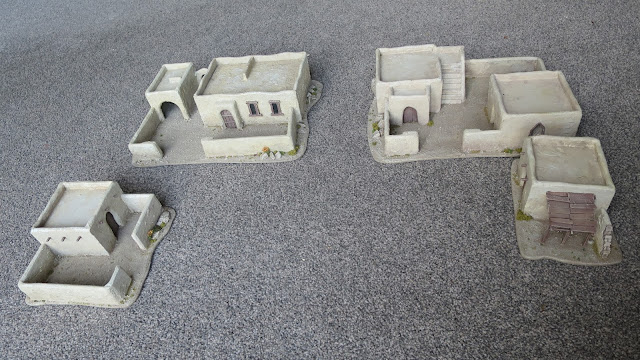 I have added a couple of civilian ladies to my collection of Peninsular War figures. Finding suitable civilian models for the Napoleonic period is a nightmare, and these two fall into the 'well it will do' category as they are not ideal.
The lady in the lilac dress was bought on ebay, and comes form a range of Napoleonic ladies (many of whom are in Napoleonic era army uniforms for no apparent reason). They also do a female gun crew and a guerilla leader that might be useful. This one is described as an officers wife. She is carrying a small pistol. I would have preferred if she was unarmed, but there you go. She is also rather on the tall side, towering over my Spaniards. In some scenarios she could be a spy- perhaps 'she' could even be a man in drag?
Her costume is quite authentic for the period although the details on the pistol are very soft and unconvincing. I would consider getting another one and converting it to a civilian by changing the pistol to something else- a parasol perhaps. I would also consider grinding down the thick base and making her a few millimetres smaller. 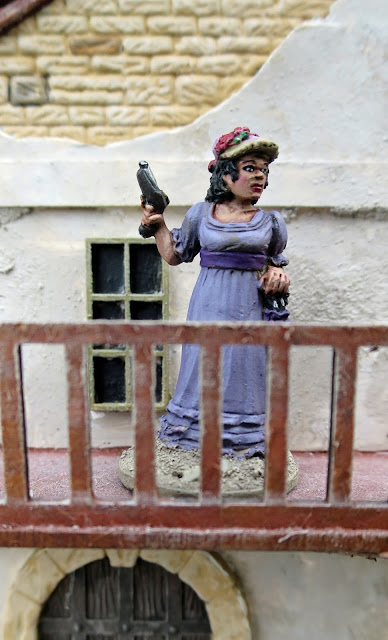 The second lady was from West Wind and was found in a box of old figures Pulp citizen gave me. It's not right on so many levels- the sculpt is odd (as many West Wing models tend to be), and her figure is very peculiar, with a tiny waste and big shoulders and the dress is completely wrong for the period (and any period as fas as I can tell). her gloves look like they would be good for welding or handling hazardous waste. On the plus side- this figure didn't cost me anything and she isn't armed- so that's good. She will make a suitable model for some damsel to be rescued by a dashing Royal Navy Officer or a grim rough and ready Rifleman. 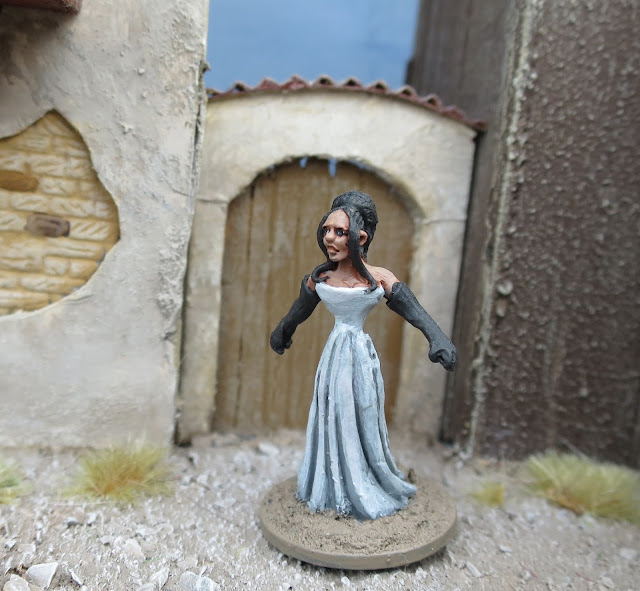