This Sunday say my first opportunity to play Sharp Practice 2 down at Earlswood. I refereed the game while Vlad and Dean played the French, and James and Dave played the British.

The table was set and sides chosen at random. The battle was the basic battle mission for the rules- keep things simple for the first game. Because the random location of the deployment point meant that they set up at opposite ends of the table the game ended up being fought down the length of the table. The British set up inside a farm with sturdy walls, while the French were advancing from the open farmland.

The initial  few turns of the battle favoured the French as they were able to get a lot of their men onto the battlefield before the Britsih could get organised. Major Ramsbottom led the Portuguese and the Highlanders out onto one flank to protect the farm, while the Hanoverians took up position along the walls of the farm yard. The Portuguese and Highlanders faced two formations of the French- (they were outnumbered 2-1) but their orders were to hold at all costs. If the French could break their flank the Hanoverian would be in trouble as the French and Irish Voltiguers were getting in position to out flank them.

The decisive pivot point in the battle came when the King's German Legion turned up, along with a detachment of they Highland Light Infantry, and suddenly the tide seemed to turn in the battle. The Voltiguers who had, up until now, enjoyed the advantages of being able to snipe at the Hanoverian Regiment in the farm found themselves confronted by a huge formation of KGL firing controlled volleys into the orange grove to flush out the French and Irish skirmishers.

What happened next was, as often happened in Napoleonic battles, a matter of turning the flank. If the Colonel le Grande Fromage could break the Portuguese and the Highlanders with his line infantry he before the voltigeurs broke he could march right up to the flanks of the British line. Similarly, if the KGL could rout the voltigeurs before the British flank broke then they could roll up the French line with ease.

In the end it was the Voltigeurs who broke first, having been reduced to just two men and having had their officer killed by an unlucky musket ball. This was the beginning of the end for the French. Having lost the flank (and 7 force moral points) Colonel le Grand Fromage decided he would order his men to withdraw. The battle was over. The Irish Legion had lost a lot of men, and a competent officer. The Scots and Portuguese had been badly battered but thanks to the heroic leadership of Major Ramsbottom, they had held off twice their numbers of French line.

Here are a few Photos from the game...

Overall impressions of Sharp Practice were very favourable. It flows well, and has an instinctive and easy to learn mechanics. Its similarity in many ways to Chain of Command made it even easier for my players to pick up, as we have all played that game. Everyone liked it so much that they want another game at the next club night, but I will have to get some more French painted before then.
Posted by Rob Bresnen at 08:27 2 comments:

Since Sharp Practice 2 came out I have been very busy with my Peninsular War Napoleonic skirmish- mostly working on the French, as well as getting my sabot magnetic bases sorted out. in the last two weeks I have painted a house, a cart and nineteen figures!

Here are some photos of what I have been working on.

First up- a French Deployment Point Marker- Sharp Practice 2, much like Chain of Command, uses deployment markers to denote where troops arrive on the board from. I was hunting around for a suitable marker then I found these two figures- A hussar offering a cantiniere a purse of coins  in exchange for a flagon of strong ale. The Hussar is from Foundry. The cantiniere was from the same  Ebay seller who sold me the Spanish ladies. 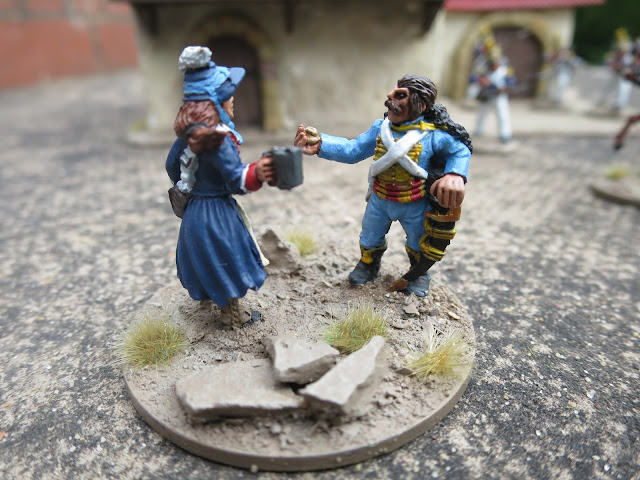 Next up- a French infantry Colonel form Warlord Games. 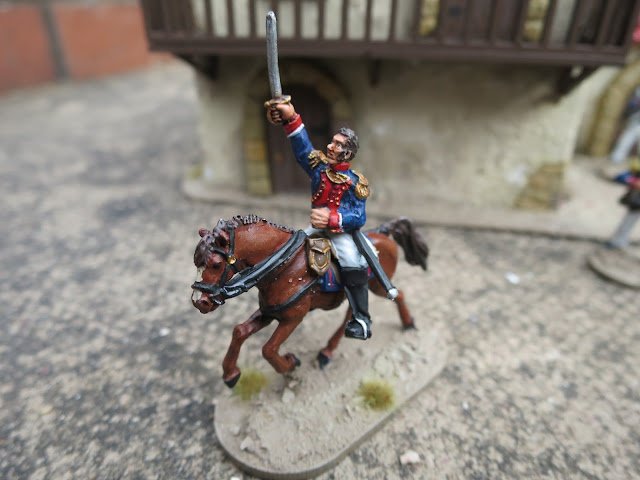 And finally here is my finished house- I want to add some interior details at some point but it will do for now for Sundays game. 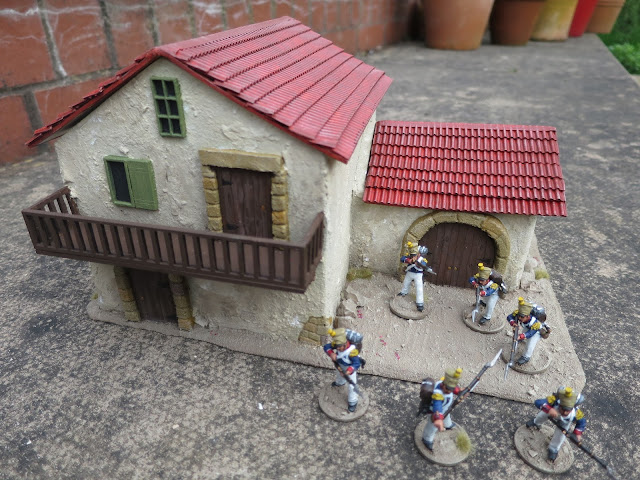 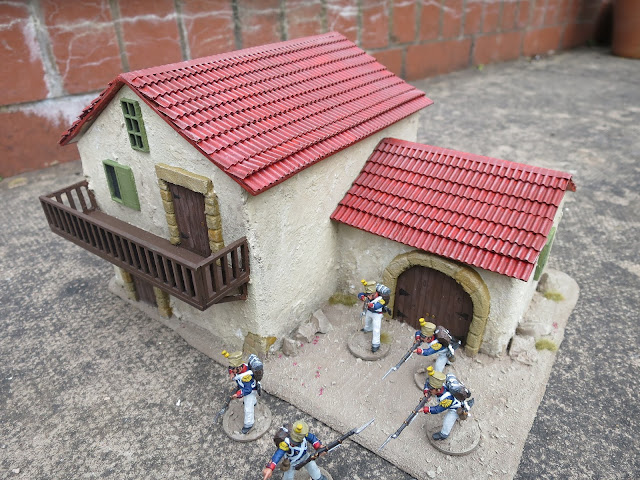 Getting ready for Sharps Practice:Magenetic Bases

I was looking for a basing solution that would work well with the 1p coins I use for the bases for my Napoleonic figures, and I came across these trays made by Warbases which include small holes for magnets. I bought some rare earth magnets from ebay and spent last night glueing them into the Warbases trays, and applying sand. They work a treat and as you can see are capable of holding figures in place even if the tray is inverted. This figure is a plastic one but the magnets are just as capable of holding a metal figure. The only problem is that some older copper coins in the UK are not magnetic and when I first started basing my Peninsular War armies I never bothered to check if they were magnetic, as a consequence I will now have to re-base all the figures who don't have magnetic coins as bases (doh!). 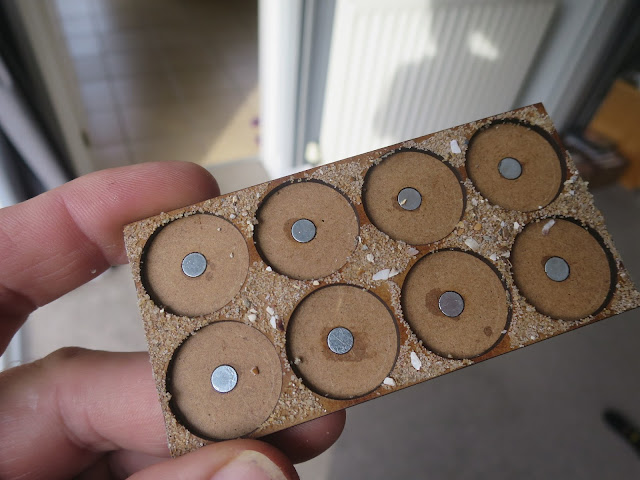 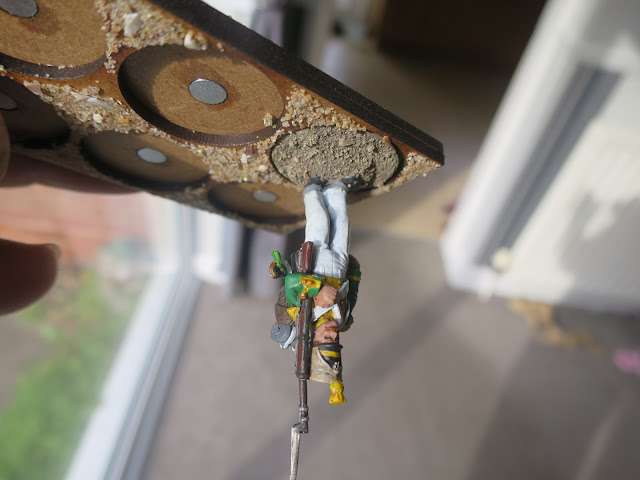 Getting Ready for Sharp Practice: Work In Porgress

Having agreed to run a Sharp Practice game at the next Earlswood Wargames night if occurred to me that I could do with another Spanish farm house as I usually play on a 4x4 board and this game will require a 6x4 table. Here are some Work In Progress shots of my farm house under construction. Blue foam was bought from Atenociti's Workshop, the corrugated card was from Hobbycraft and the doors, balcony and windows were from Warbases. The gaps were filled with ready mixed floor tile grout, and then additional texture was added by rubbing ready mixed fine surface plaster filler onto the blue foam with my finger tips. 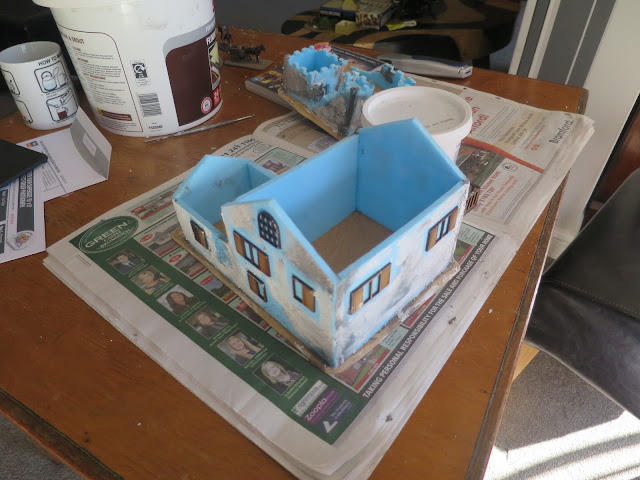 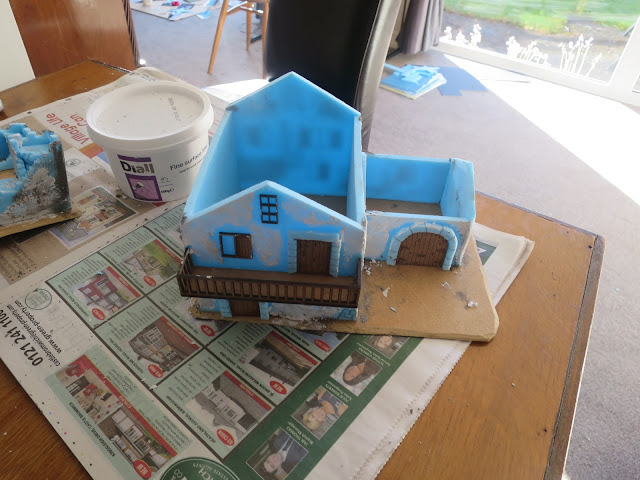 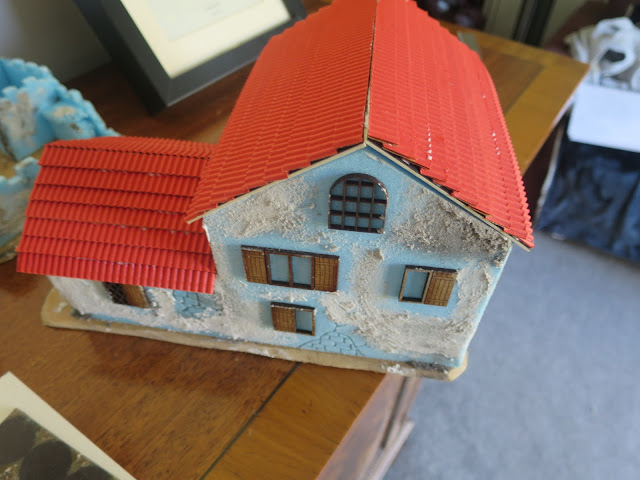 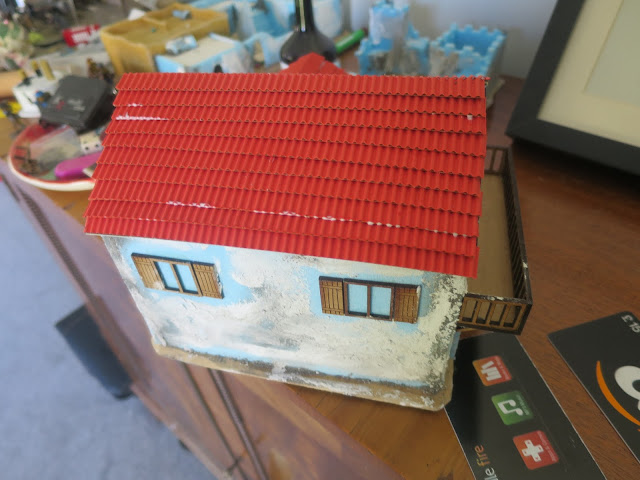 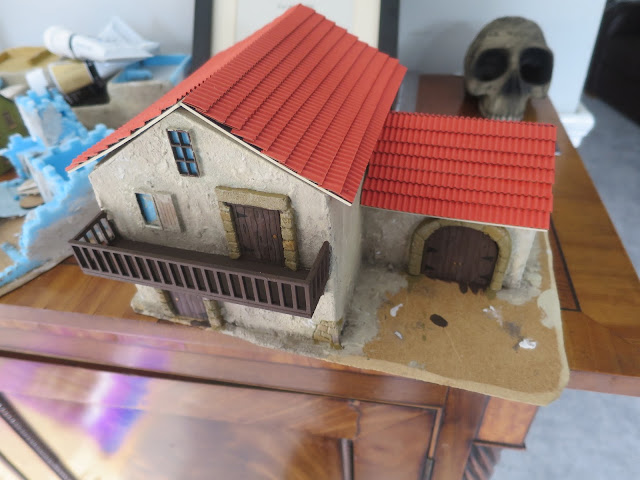 I have still got to paint the windows and the roof, but as you can see I am progressing well. I will post finished pictures as soon as I can.
Posted by Rob Bresnen at 03:48 6 comments:

A Few Photos from Earlswood

Last weekend I managed to get a game in at my local wargaming club in Earlswood. I played Fighting Sale by Ryan Miller, and published by Osprey. It is a naval wargame- we fought an engagement between the French and British navy during the Napoleonic wars. Vlad brought along his huge armada of very tiny ships. It was great fun, even if I lost two third rate ships to Vald's shockingly fluky dice rolling. I took lost of photos of the game but unfortunately the game was not very photogenic, being fought on a big blue cloth with tiny ships.

Elsewhere Big Al et al were fighting a battle from the American Civil War, which I had no idea who won, but looked very pretty and was far more photogenic.

Here are some photos of both games. 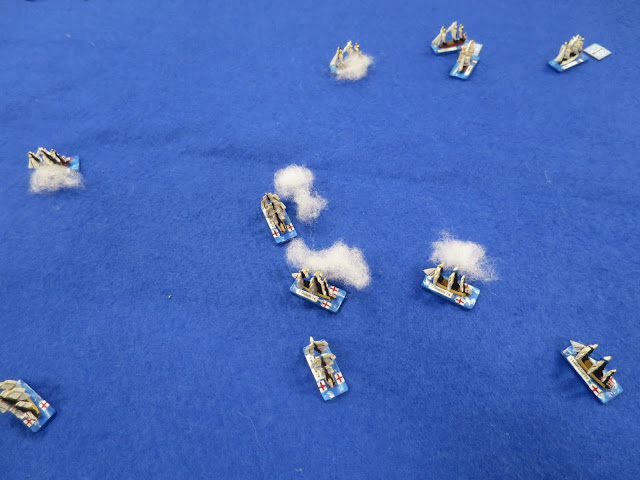 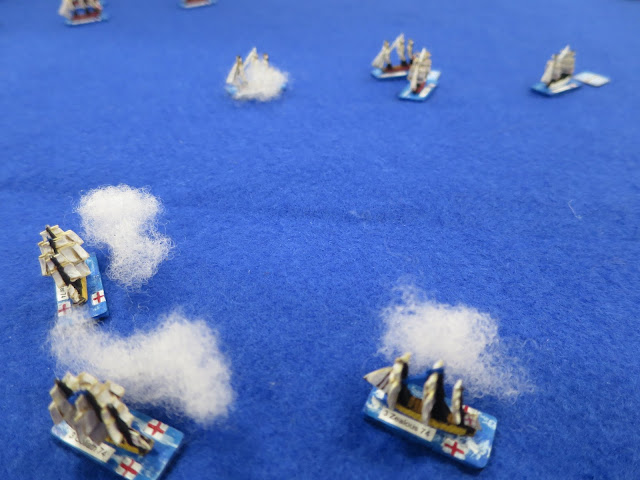 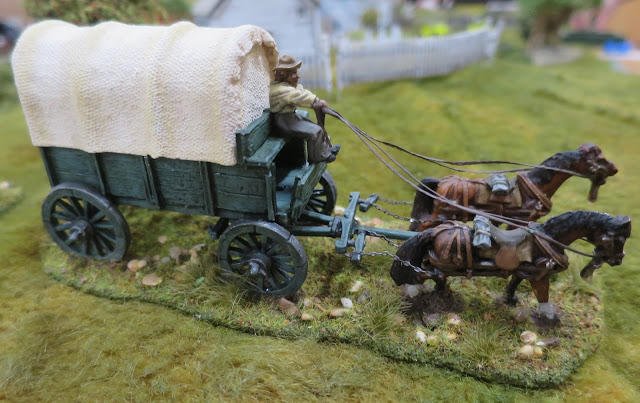 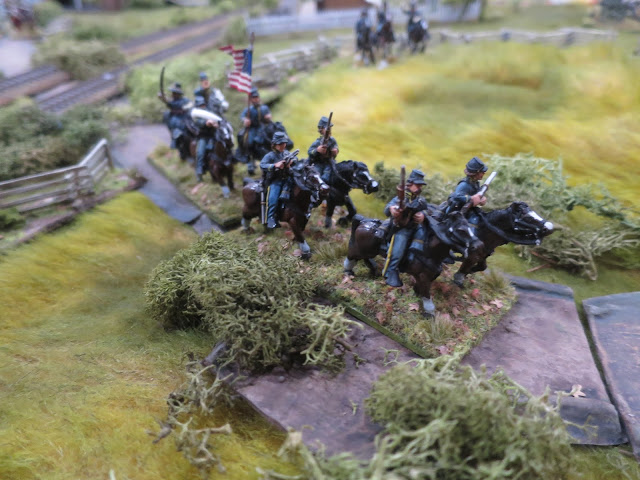 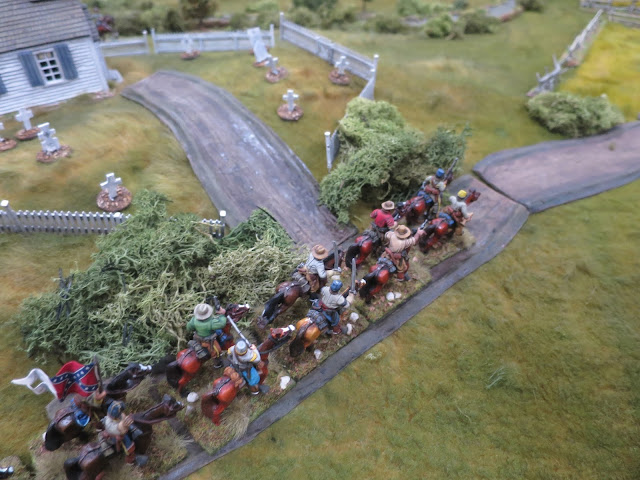