On The Seven Seas: Pirate Crew

I got these for Christmas, and have really enjoyed painting them. It's given me that eighteenth century bug again. As you can see I haven't held back on the colours, going full on for garishness and tastelessness. My pirates like nothing more than spending their ill-gotten gains on bright coloured clothing. Not very realistic or historically accurate but what the hell- their captain is Captain Hook for God sake!
The only down side of this is that the On The Seven Seas starter kit doesn't contain enough figures for the starter crew, so you have to go an buy as second box- and then you end up with spare! Just silly if you ask me.
The figures are from North Star. I am considering getting sailors from Foundry or Galloping Major to fill out the ranks but I am not sure about scale compatibility, and beside, these North Star ones are a pleasure to paint. 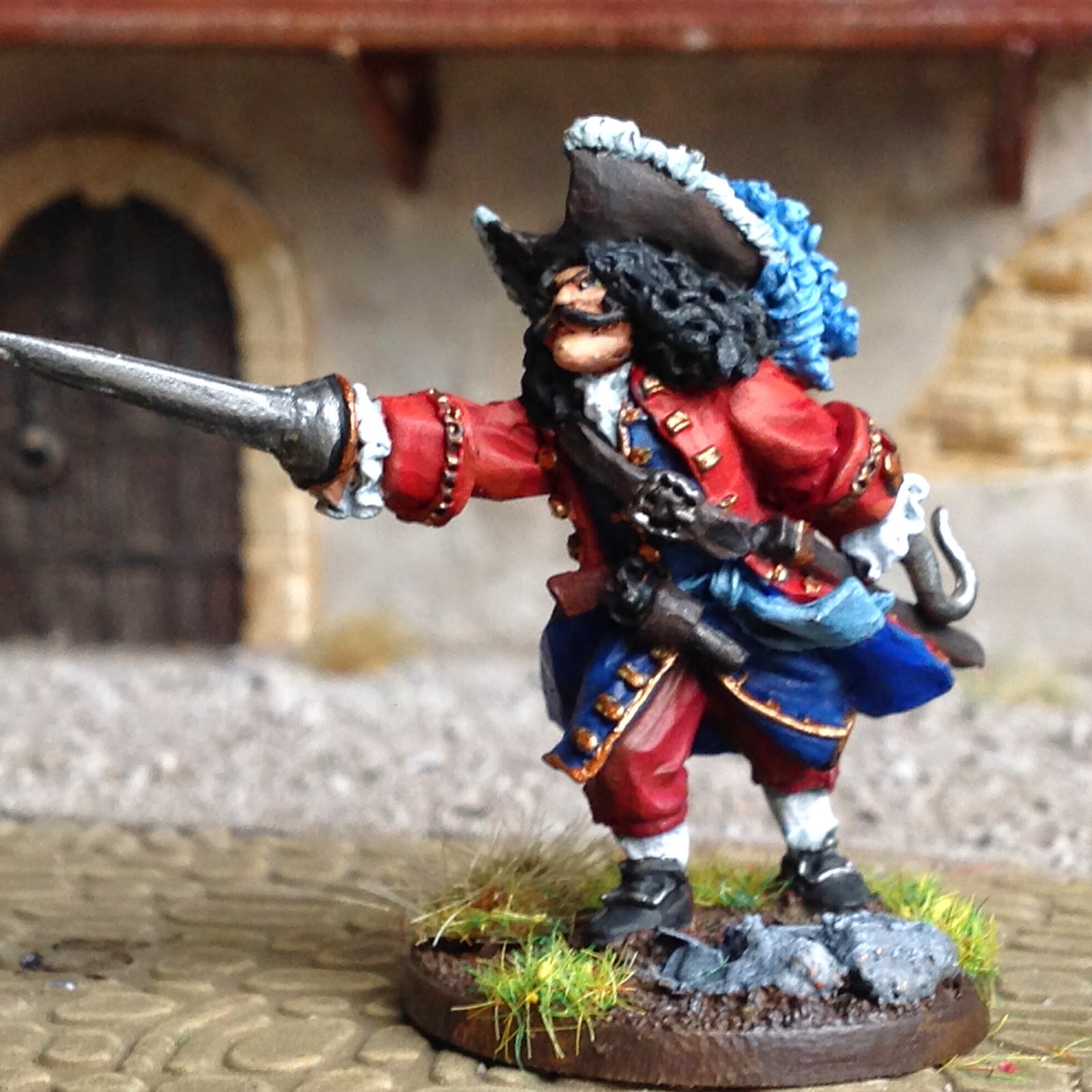 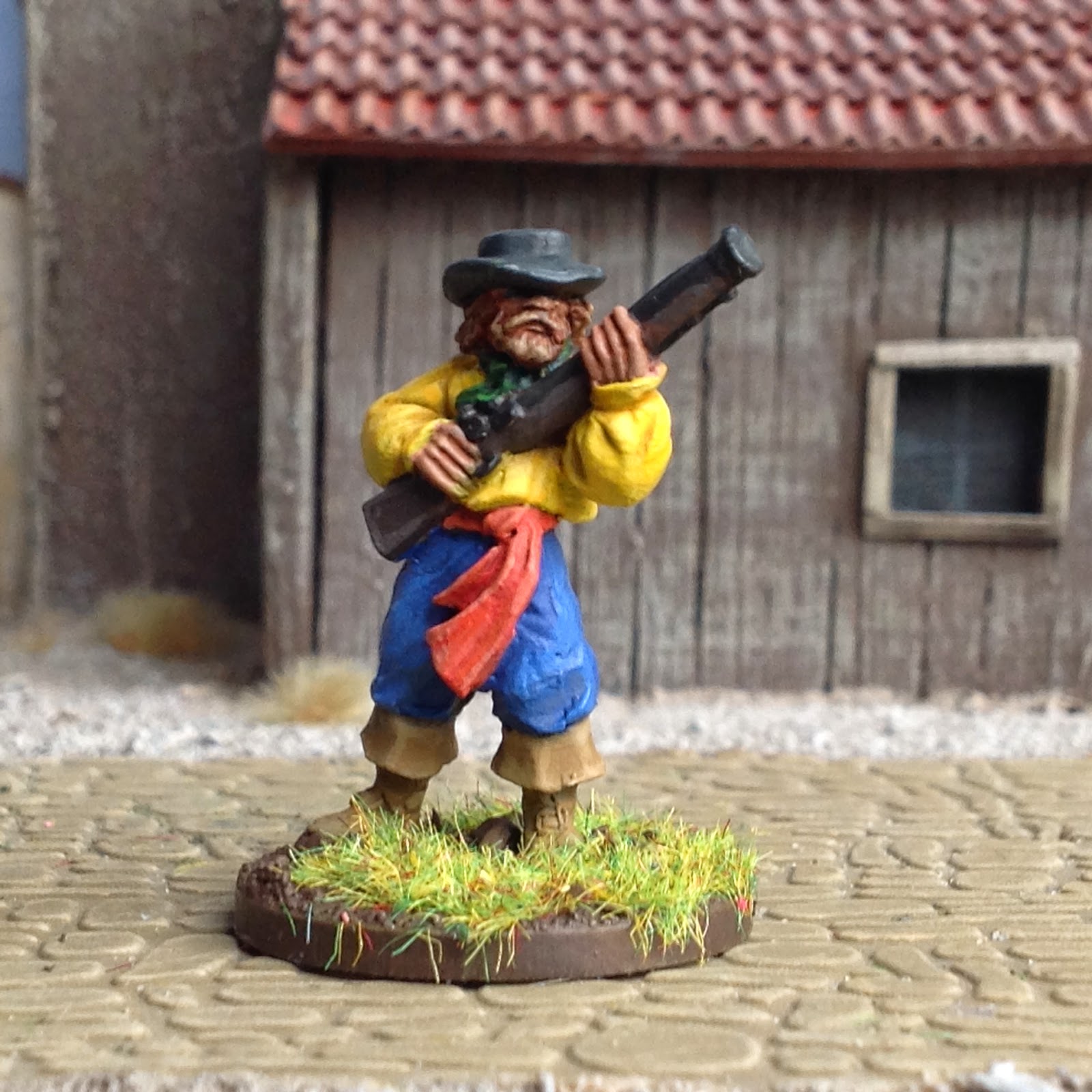 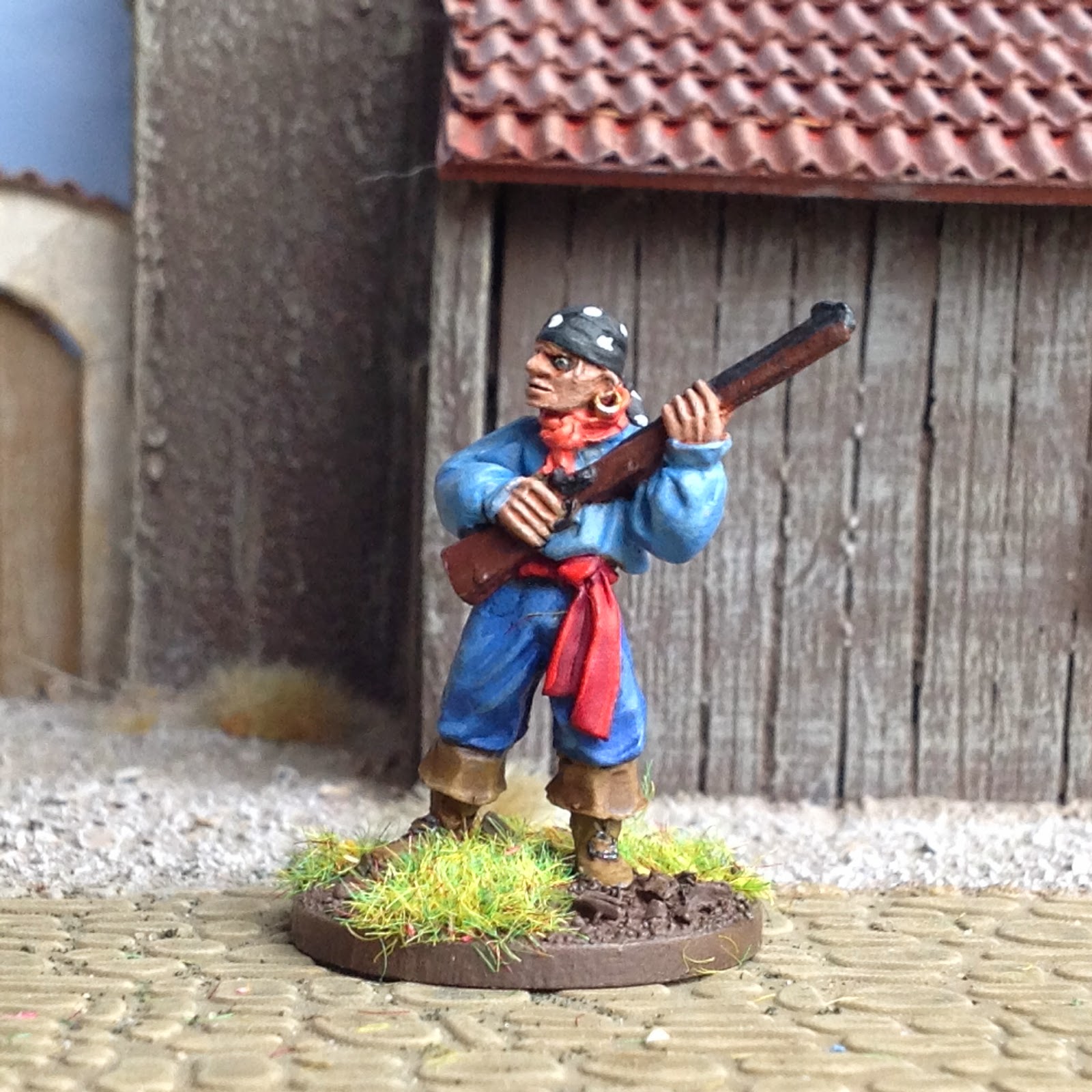 Here is picture of fallschirmjager (German paratrooper) crewing a 7.5cm light howitzer as part of my FJ army for Bolt Action/Chain or Command. It is made by Black Tree Designs and I picked it up last year in the January sales.
From a painting point of view I prefer the Artizan Designs sculpting style to the BTD ones, but they are very comparable in terms of size/bulk etc, so work well together and the BTD range does fill in some of the gaps in the Artizan range, like this little cannon.

The 7.5 cm Howitzer was a very common gun in the German army and Luftwaffe ground forces. it was used by the FJ as it was light and easy to transport, often being towed with a Kettenkrad, which was a sort of half tracked motorbike light enough to be transported by plane (The Kettenkrad is on my to to list).

Here is the first of what can only presume will be an army of Warjacks for War Machine. I got this one of my mate Pulp Citizen for Christmas and have finally got round to slapping some paint on it. Hopefully it might motivate Pulp Citizen to get cracking and paint some more of his. There is also a good chance that this might be press ganged into In Her Magnesite Name as a steam powered automaton. We are trying the game  (IHMN) out at Earlswood this weekend, as one of the young lad fancies having a go at building his own company. I don't know what the older members of the group will think of Victorian SciFi- I hope they don't think I am lowering the tone. 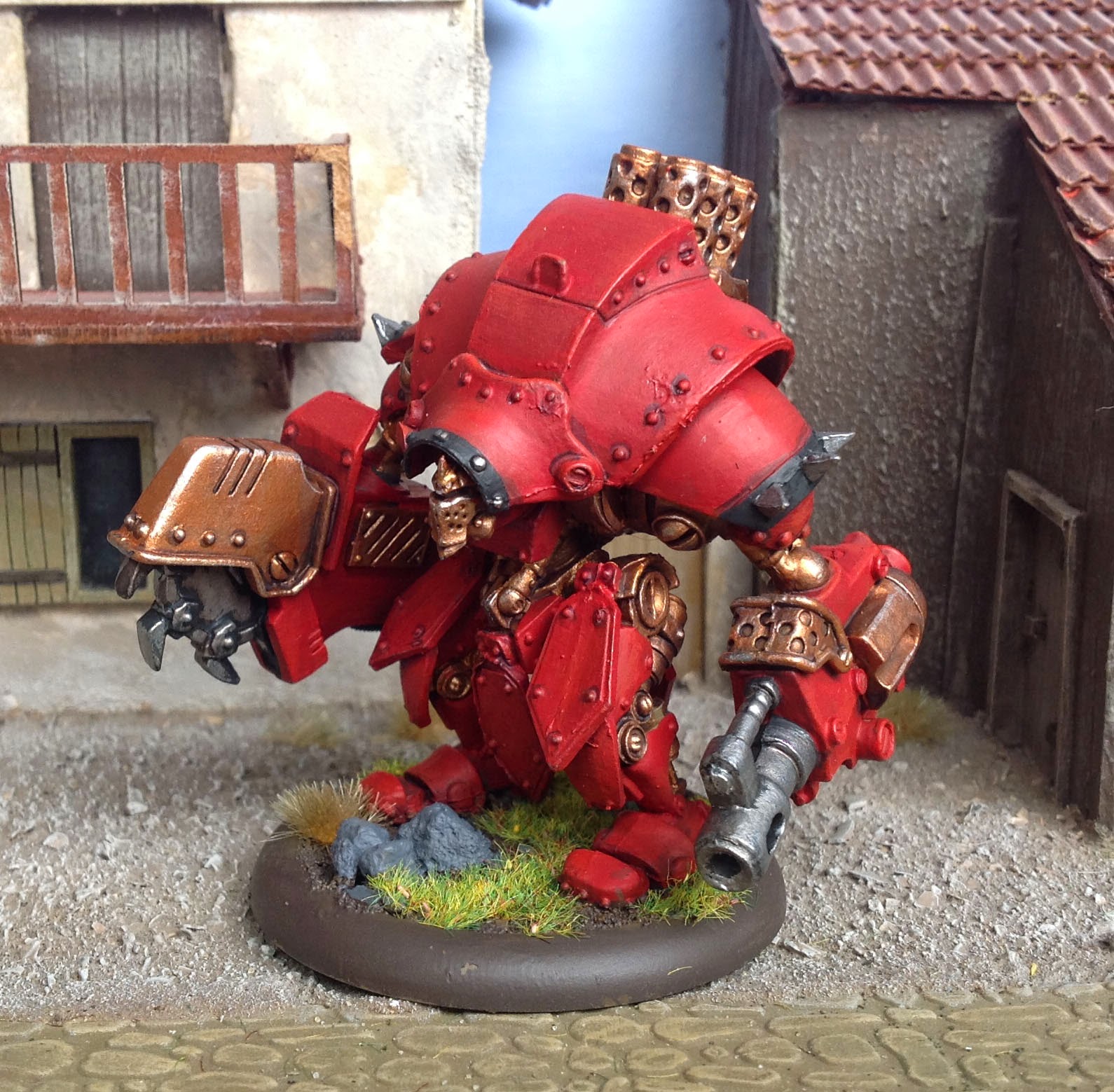 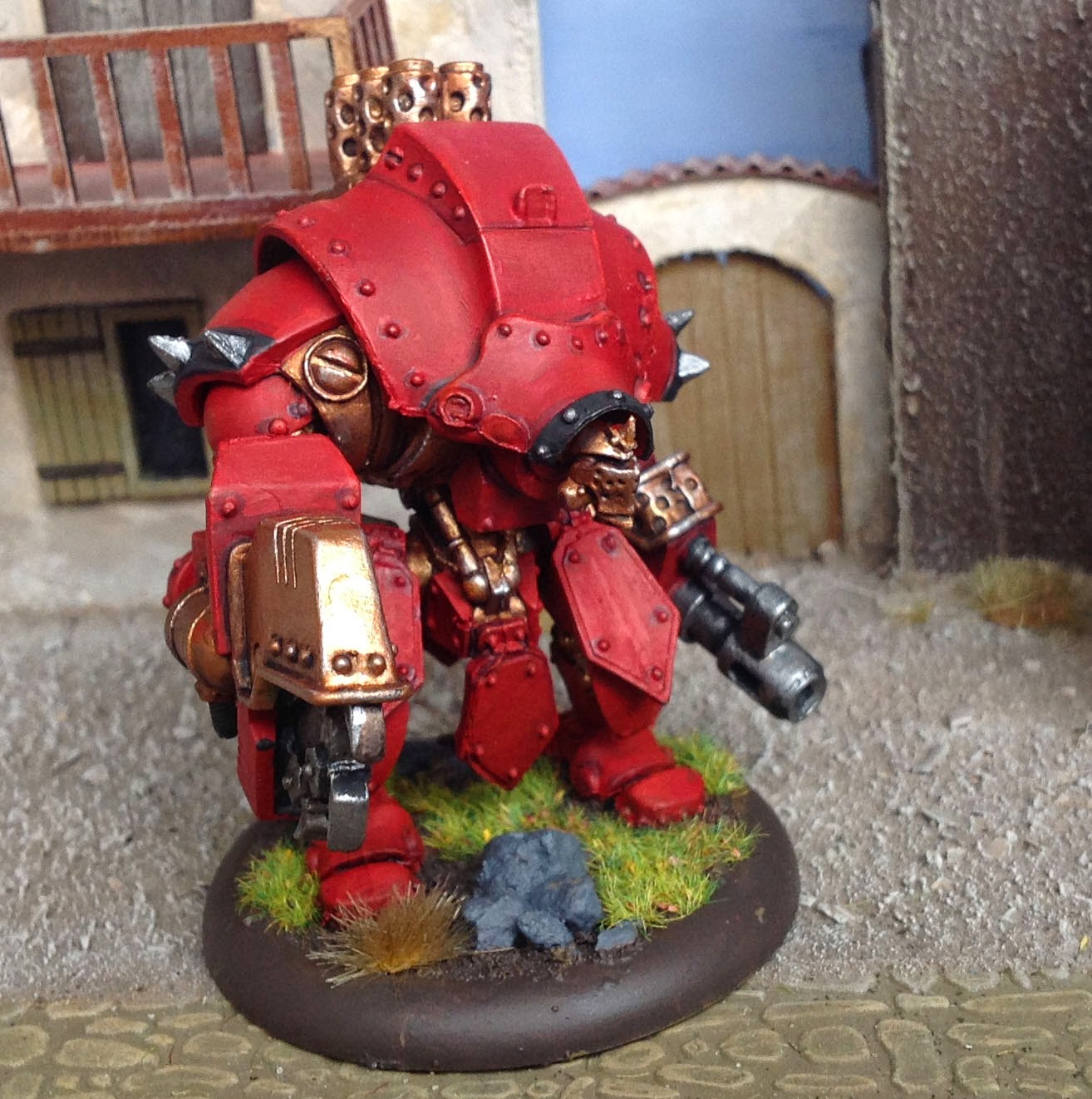 Today was the West Midlands Military Show (also known as Allumwell Show), a wargaming and modelling show. I went with my son and had a really nice time, and saw some familiar faces. Here are a few photos of some of the battles being showcased. There were lots of nice tables but here a a few of my favourites. 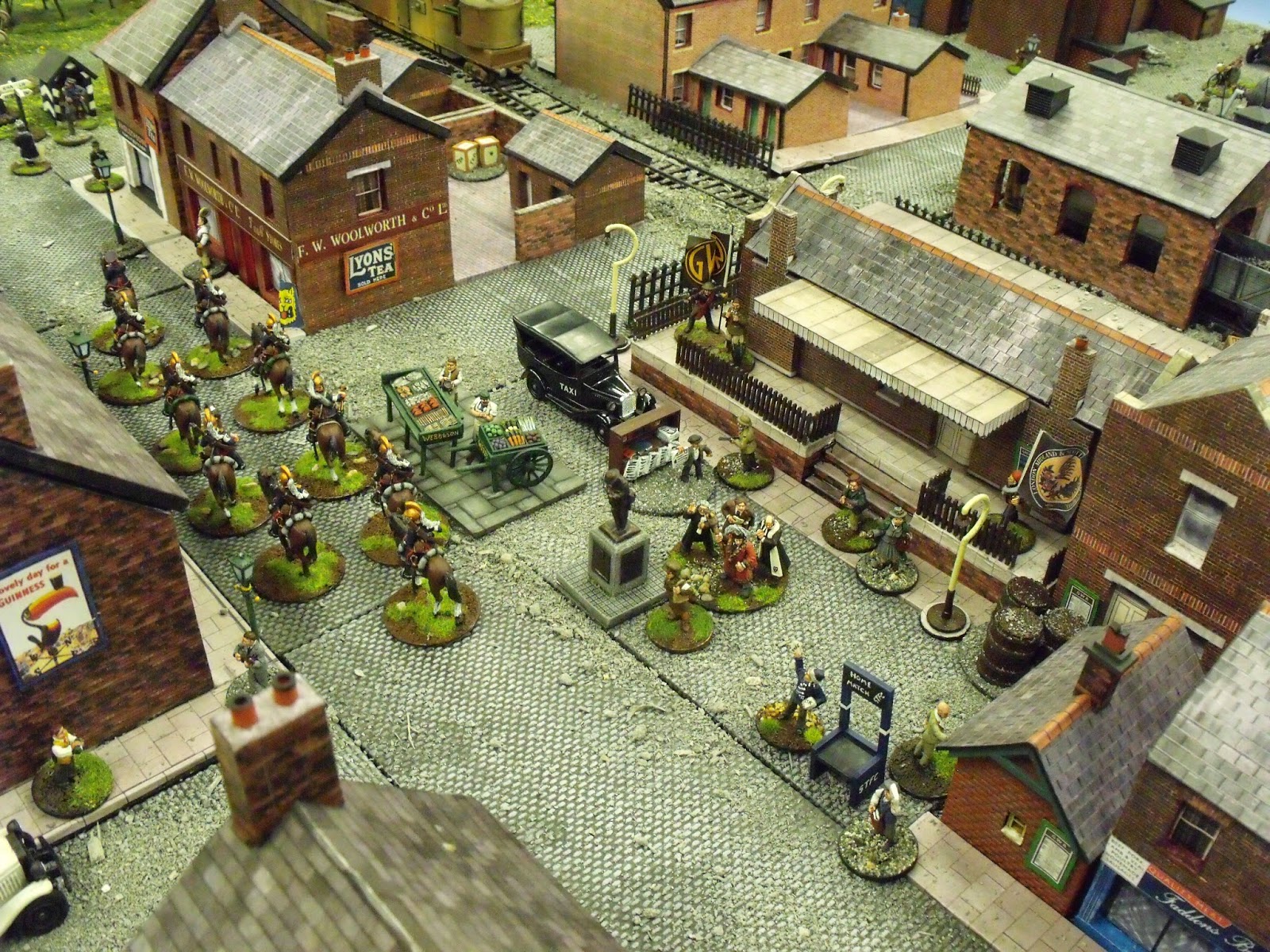 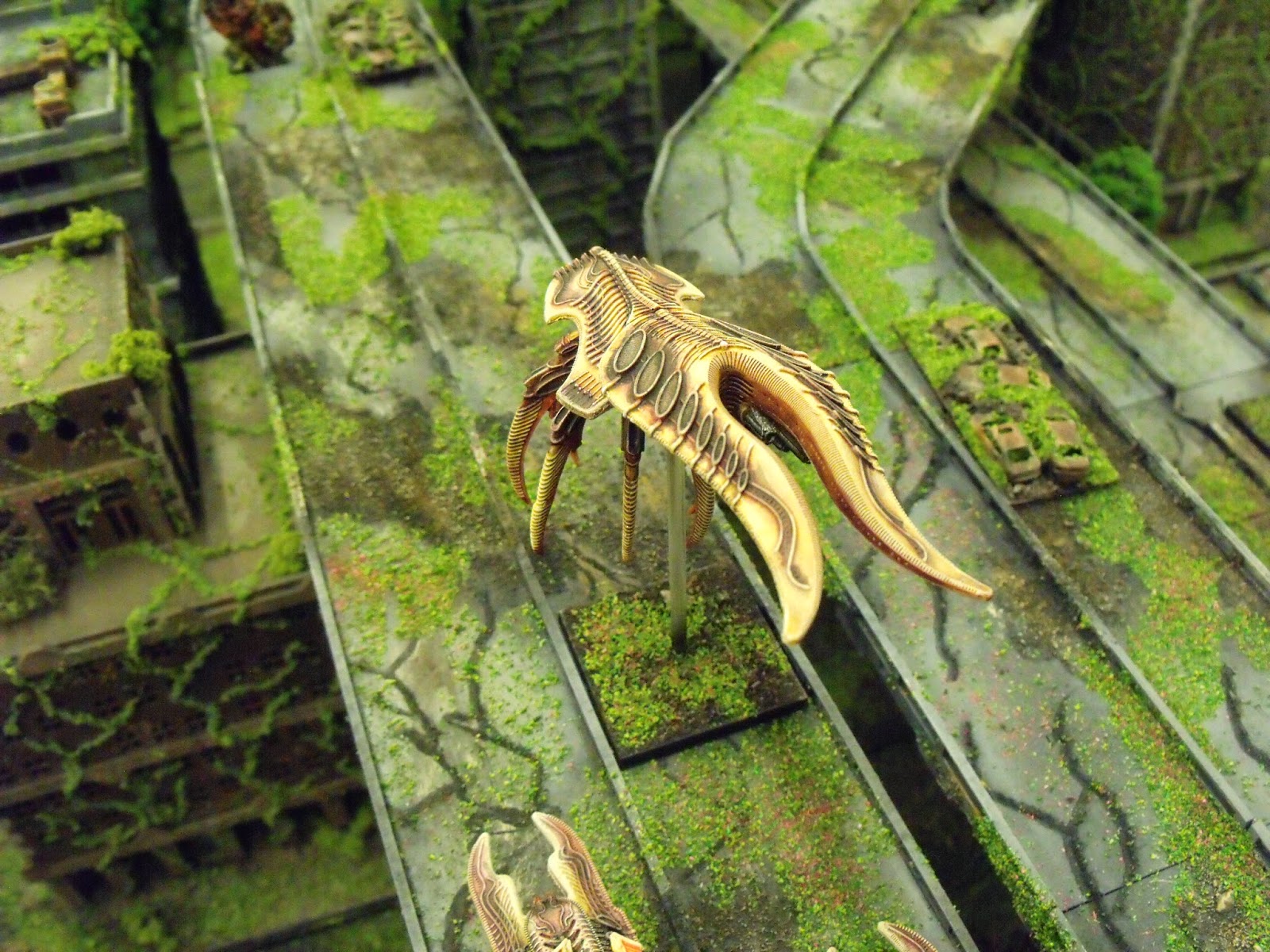 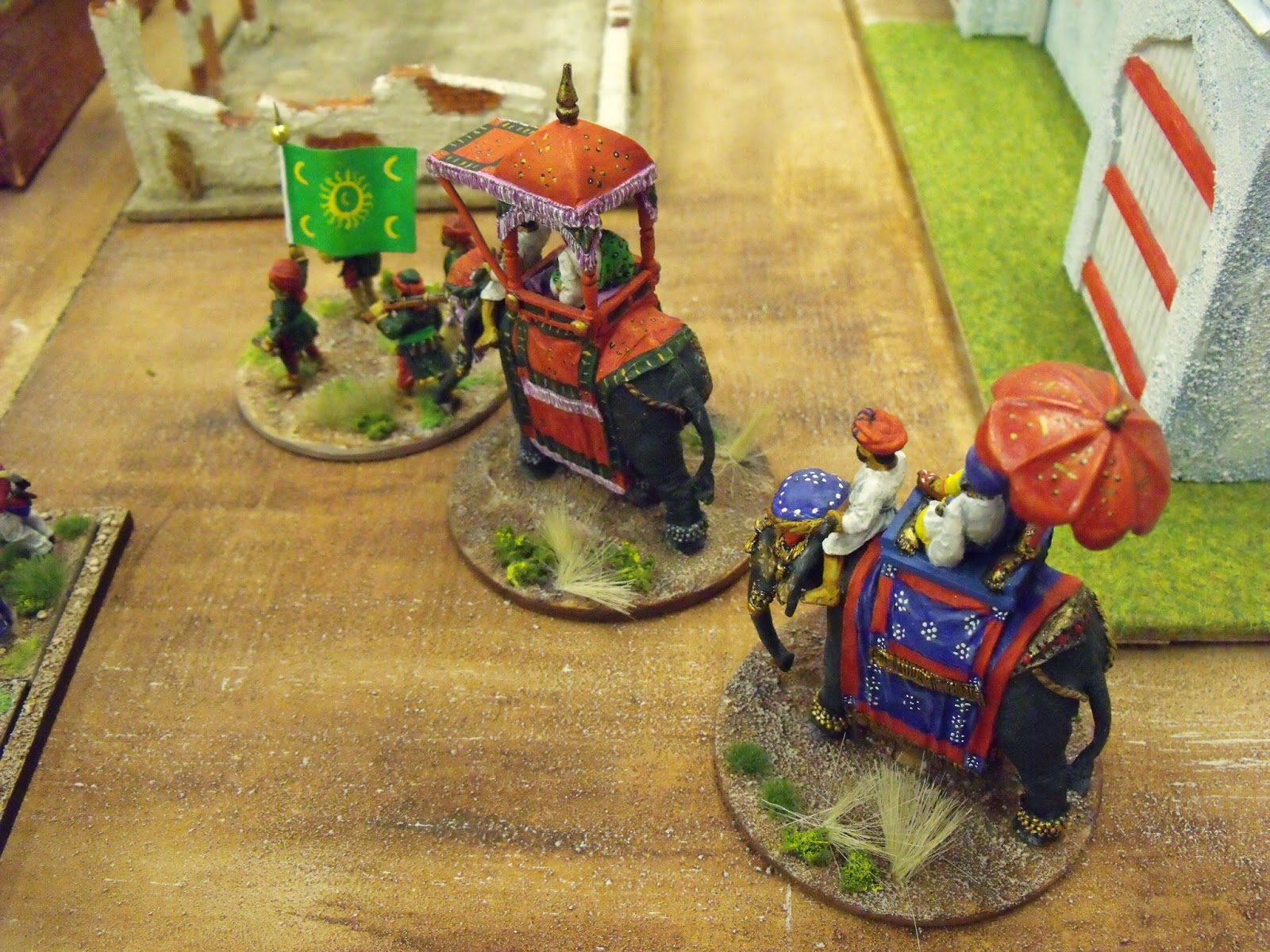 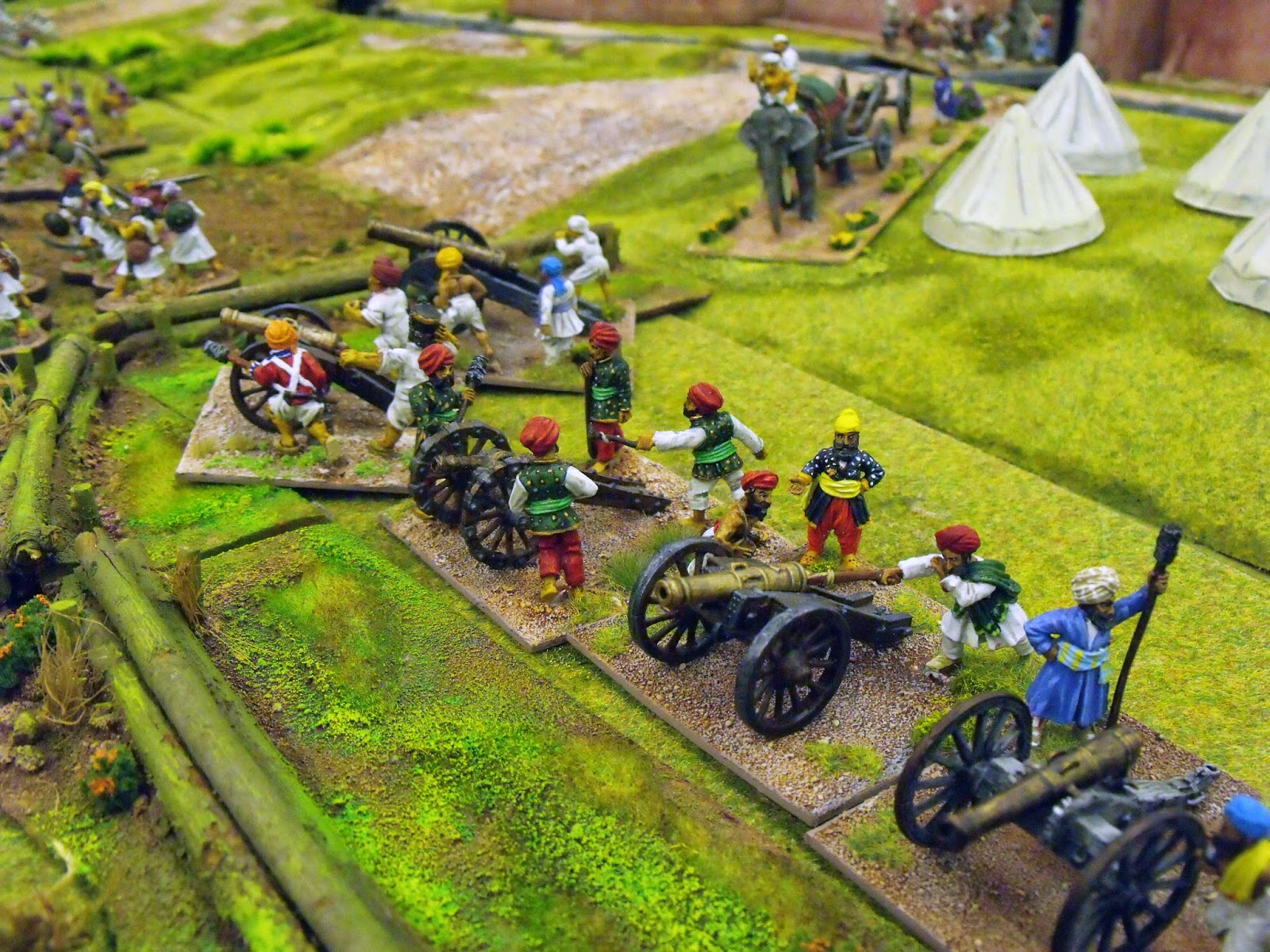 Needless to say I spent a load. I bought some more Fallschirmjager from Artizan, Spanish militia from Eagle Miniatures, some terrain and, most unexpectedly, some 15mm Weird World War 2 stuff from Clockwork Goblin (not a company I have even heard of before but their figures are lovely). I plan on using them to spice up my Flames of War army.

Here is Dirty Maria, another crewman (crew-woman) for my Freebooter's Fate pirate crew. She brings the crew to six. 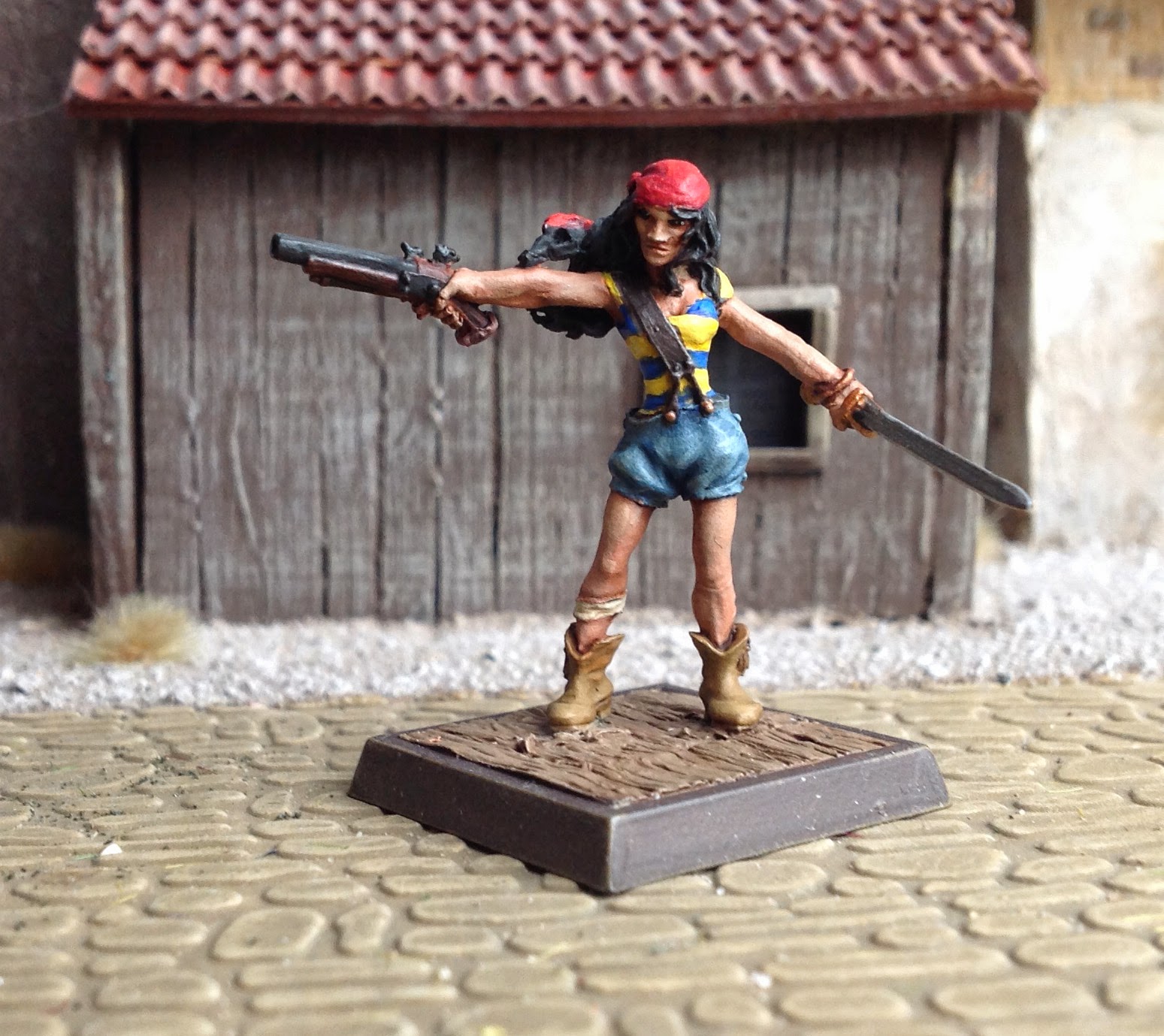 Introducing Stabby Pete, a crewman for my Freebooters Fate pirate crew. I bought him almost twelve months ago at Salute and just finished painting him. A nice characterful model that was a pleasure to paint! 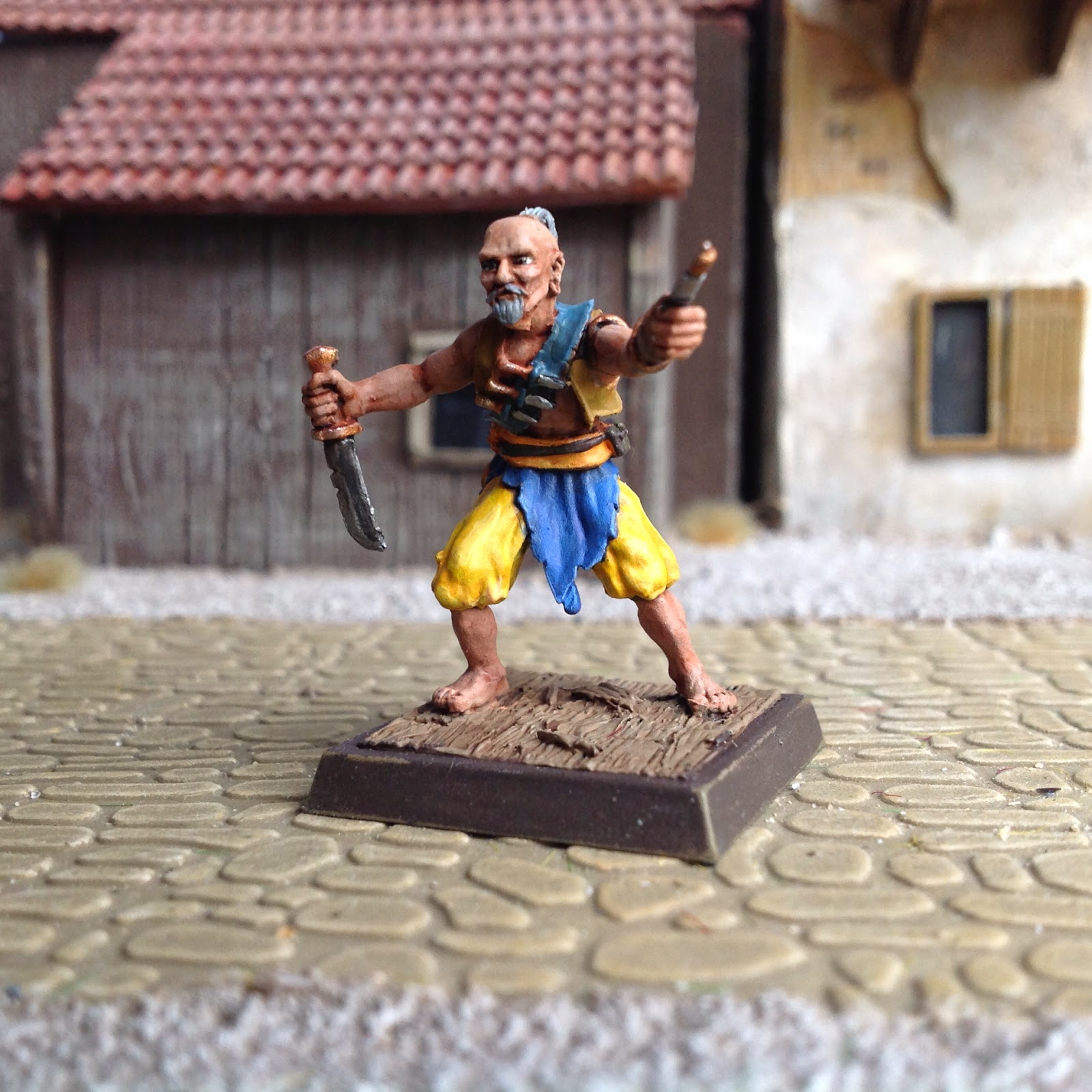 In the second instalment in the Songs of Drums and Tomahawks games the British major of the garrison, upon hearing of the massacre at Johnson's Farm, has dispatched a patrol of British Regulars into the valley to find and punish those responsible for the attack. Sargent Skinner is leading the patrol, a man with a reputation for really hating the French. Unfortunately for the British an Iroquois turncoat has informed the French of Sargent Skinners movements. The French Commander, Lieutenant Philippe de Champion, has decided to lead a force of his militiamen to ambush the British as they march through the woods.

In this ambush the French has slightly less points that the English, but they set up using hidden deployment and the British can not retreat into cover if they are shot at  so long as there is Frenchmen hiding in the trees. If the results of an attack compels them to move towards cover they musty instead go prone. Once one flank is secure then the normal rules take over and the British can fall back into cover as normal.

The ambush was sprung when the British light infantrymen moving ahead of Skinners column came under attack. One of the lights was killed outright, and another musket-ball came perilously close to Skinner. The sergeant, who was jolly annoyed, charged into the trees to take the fight to his French foes. Armed only with his pole-arm, he set too, killing a Frenchie with a powerful blow. The Redcoat infantrymen formed into two lines, facing each flank,  and fired their muskets into the forest. It was difficult for them to see their foes, but even so a few Frenchmen were wounded by the attack.

Sargent Skinner and the remaining light infantryman dashed through the woods and eventually killed or captured the remaining French militiamen on the one flank, while his men poured relentless musket fire at their foes on the oppose side of the road. The militiamen were forced back by the English firing, although they managed to wound two more redcoats.


The final blow for the French came when a lucky shot from an English musket wounded Lieutenant de Champion, and the remaining militiamen dispersed back into the forests, carrying their stricken officer with them. The English were not about to charge into the forest after them, so they collect their dead and wounded and head back to the garrison. The French had lost six men, compared to the English, who had three casualties.

Despite the difference in points it was felt that the game was balanced. The fact the French had split their troops up made maintaining command and control was difficultly, while the English benefited form Skinners leadership throughout the battle. Skinners skill in close combat proved quite effective as well. He has the trait "Strong", and a Combat statistic of 3. The combination of the two make him a serious threat in combat.