In 1938 (Very British Civil War) the paramilitary forces of the British Union of Fascists is not as uniformed and united as Mosley's government would like us to believe. It is essentially split into two forces, the BUF Legion, who are centrally controlled and supplied, and resemble something similar to a conventional military force, and the BUF Militia, who are created locally and under the control of the local party leaders.
This picture is of the members of the Chester BUF Militia. They have been supplied by local business man and BUF Member of Parliament Sir Charles Robinson MP, who has contacts in the Nationalist government in Spain and has managed to buy up some surplus weaponry captured from the Republicans during the Spanish Civil War.
Robinson sees his BUF Militia as his own private army, and resents the intrusion of the Manchester BUF Legion in is own little war. This has lead to tension between the two factions, and it is only with great reluctance that Robinson has placed his troops under the command of Captain Webster of the BUF Legion.

These figures are made by Empress Miniatures as part of their Spanish Civil War range. I don't confess to be an expert of the period, but I think they are Nationalist troops. I have painted them as my British Union Of Fascists militia by giving them the obligatory black shirts. I kept the colour scheme simple, and found that I knocked out these five in just two evenings- something of a record for me- a damn site quicker than my other BUF uniform.

Just another quick one, to show off another barbarian panted for my Conanesque campaign and/or my Conforntation Kelt warband. I dropped this one, and broke his axe in two places. I had the devil of a job putting it back together, and now one axe handle is shorter than the other. I don't think you could tell unless I pointed it out to you, so I am not too worried. I hope you like it. 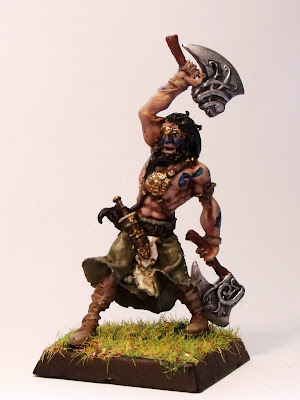 This figure is another out of production Kelt, made by the defunct French company Rackham for their confrontation. It is a great shame they no longer make these, as they are beautiful models.
Posted by Rob Bresnen at 13:17 2 comments:

It is not a widely known fact that the bedrock on which the city of Birmingham is built is riddled with a honeycomb of tunnels and caverns. Experts speculate on their strange origins, with many speculating that the are not naturally occurring. Rumours persist amongst the mystic community of an ancient god-like being, Menoth, who slumbers beneath the city in the deepest depths of the caverns. The Mole People and their allies amongst the dispossessed and homeless maintain that it was Menoth who dug these tunnels in the first place. Who can say if this is true, or perhaps what it might take to wake Menoth from his long slumber. 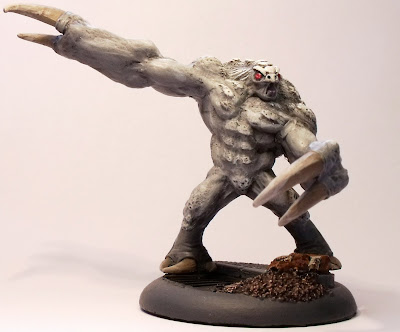 This figure is a mutant released by Hasslefree that I bought at Salute last year.

Its difficult to get a sense of scale from this picture, but that's a 50mm resin base he's standing on. The base was a freebie I got from Fenris games.

Just a quick blog to show off a picture of my painted Panzer IV for Flames of War, made my The Plastic Soldier Company, and reviewed a few weeks ago in this Blog. 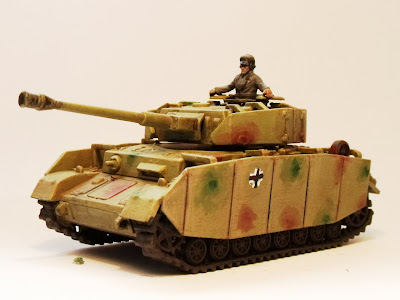 I hope you will agree that it has come out well - It's in 15mm scale, and as you can see is a very crisply detailed figure. I will be ordering some more stuff, for my Brits, from The Plastic Soldier Company, very soon.

I have now finished my first bit of the Panzercompanie, having added another StuG G and a Bergepanther. More pictures of the entire company to follow soon.
Posted by Rob Bresnen at 09:20 2 comments:

Veteran superhero Thermal has recently been seen back on the streets after a four year hiatus. Many believed the hero had retired, or perhaps been killed in the cause of his duty, but last month he was seen battling with the supervillain known as Dr Apocalypse. Since then the hero has been seen many times, lighting up the night sky as he streaks across, like a blazing comet, seeking out criminals and villains to bring to justice.
So far Thermal has remained tight lipped as to where he has been, or why he should suddenly have returned. 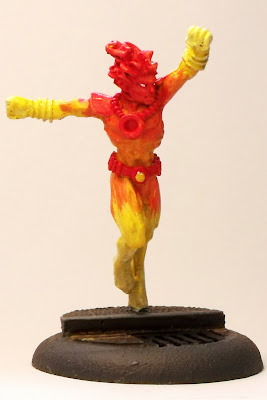 This is an old Superfigs miniature I painted years ago, but it is one of my favorites, so I singled it out for some special attention. Unusually, I opted to undercoat this figure in white, as I nearly always use Chaos Black. This makes the colours almost glow, which is exactly the effect I was after.
I had wanted to rebase this miniature for ages, but have been reluctant to, because I thought it would be difficult because I would have to carefully pin it through one foot, but then me old mate Leon (Pulp Citizen) told me about this technique where you trim down the intergral base to make a peg, instead of cutting it off, then drill a hole in the resin base and glue it in place. I tried it and it worked a treat!
Posted by Rob Bresnen at 11:51 1 comment:

The Duke if Farnham's household militia, also known as the Chester Local Defence Force, continues to grow, as the duke has increased it's number to two companies. They are not very well equipped- just a rifle, a tin hat and some webbing, if they are lucky, but they are still prepared to fight for King and Country!

A year ago, at Salute 2010, I got talking to a stall owner who had just stated up a new project, called The Plastic Soldier Company. The idea behind his company was that if he used CAD to design some World War 2 tanks and soldiers, he could scale them up to either 15mm, 20mm or 28mm.
I thought is was a jolly good idea.
I don't collect 20mm my self, but I know it is a very popular scale with the WW2 lot. 28mm is also popular, with a number of skirmish games being made to suit that scale, such as Operation Squad, and of course, 15mm is very popular with the Flames of War players. Of course, FOW produce their own range of 15mm men and vehicles, but as far as I know no one is making plastic tanks in this scale.
The Plastic Soldier Company now make a variety of pack sin various scales. They make the T-34 soviet tanks, the ubiquitous Sherman, usable in the US, British and even the Soviet armies, and the good old German Panzer IV. These kits come with various bits on the sprue to build several different configurations of these tanks, as wall as some stowage to individualise the vehicle.

Three of the Panzer IVs I built for my FOW army. You can see the impressive detailing- remember this is 15mm!

As I am currently slowly building up a FOW army, I bought a box of five panzer IV. I was delighted when they arrived promptly in the post and quickly put some together.
My first impression was how remarkably well made these were. They went together perfectly, and even though the instructions were a bit sparse, the kit was so well made that it was pretty obvious how to assemble them. A while ago my son and I built a 20mm Sherman tank from Airfix, which was a right bugger to put together. In contrast these Panzers were a joy to assemble. It took me about 30 minutes to build my first tank, but by the third I had got that down to just 15minutes, which is probably about the time I spent deflashing, washing and gluing the my FOW StuG G prior to painting it.
The detailing on these tanks is fantastic, and the lines are crisp and sharp. In comparison to the FOW resin/metal tanks the Plastic Soldier Company fair very well. These Panzers were far more detailed thanthe FOW StuG G's I have been painting recently.
As for the cost, well again the Plastic Soldier Company fair very well, with five Panzer IVs costing about £16.50, which is about half of what you would expect to pay for the equivalent resin/metal tanks from FOW.
That said, it wouldn't be fair of me to not point out that The Plastic Soldier Company's range is very small compared to the huge number of vehicles and infantry available from FOW, but their range does seem to be expanding rapidly. I can see that The Plastic Soldier Company are never going to make the obscure transport vehicles and alike that FOW sell, as their is only so much money to be made from these less commonplace items, but if The Plastic Soldier Company stick to the more popular units, I can see them gathering up a larger share of the market.
If I was to build a wish list I wouldn't mind seeing a Universal Carrier that could be converted into a Mortar Carrier or an MG Carrier, and a Wasp. The ever-present Jeep would be useful too, and could come with spare crews for either Brits (regular army, desert rats and paratrooper please) and of course Yanks. A trailer would be nice too, for the pioneers. And if The Plastic Soldier Company followed FOW into the early war period (not very likely I know) I know that the Very British Civil War lot (me included) would snap up those early war light tanks 28mm.

All in all, this product is first class- well cast, with great detailing on it, and a good price, especially when compared with the FOW range. Definitely one to recommend to others. 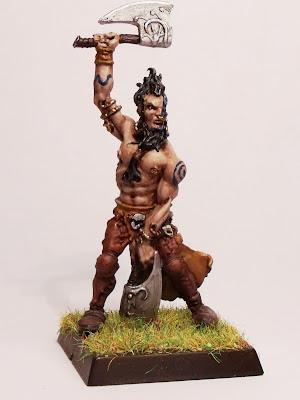 The Picts are a savage race to who dwell in the forested lands west of Hyboria. They are a cruel and debased race, and the soldiers of the civilised lands have to be constantly vigilant or these barbaric tribesmen will sweep across the Border Lands to destroy and consume all that civilised men hold dear. 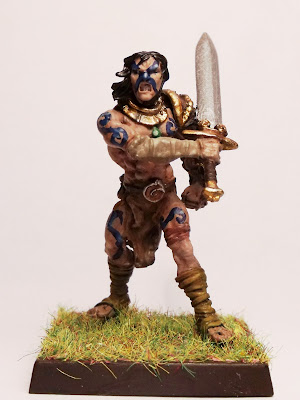 These figures are Confrontation Kelts and represent the start of a warband for that game, which explains their 25mm bases. I have painted them with black hair so that they can also represent the savage Pictish warriors in my Conan campaign.

Originally I had planed to get these fellows quickly painted so that I can get them into use, and to spend a longer time painting my Griffin Warband really well. Once I started though, I found that they were such lovely models that it seemed a shame not to spend the time painting them as well as I can.
I think it is a great pity that Rackham no longer make these wonderful minis, and instead I have to hunt around for them on Ebay an the likes.