This week saw a few more games of Pulp City fought over Leon's excellent gaming scenery. We trailed a demo game Leon will be running at Salute '11 (look out for him if your are there). I won by being sneaky, and just plain lucky too. I managed to get my reporter into position to earn agenda pints (victory points) by claiming an objective, and by snatching some cool footage of me whipping ass. While Leon certainly took out more of my guys, I managed to gain more agenda points, and claim the victory. 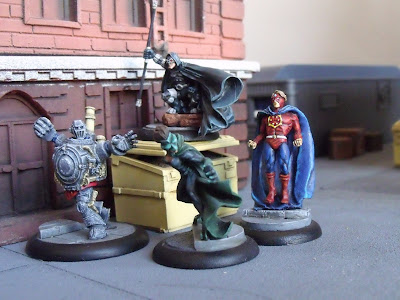 Iron Train, Jade Hawk, Skyline and Solar- My well balance heavy hitting Pulp City Heroes (Leon's minis, not mine)
The second battle was nothing like as close. Leon had this theory about using a gun heavy gang, hoping to blow me away at range. Unfortunately, the mission was a take and hold, which did not suit his style of play one bit. He was hammered into submission in just three rounds. 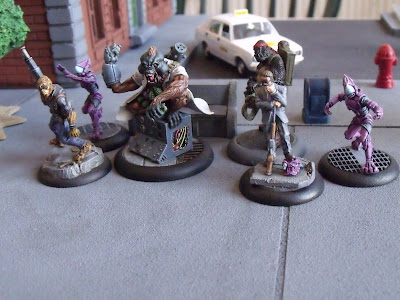 Leon's shooty villain team; Howler, Dr Red, Guerrilla, The Gentleman and a couple of robots.
Now I am not saying his theory is unsound, and perhaps in another mission he would have fared better, but there can be no doubting he was severely limited in this particular mission. 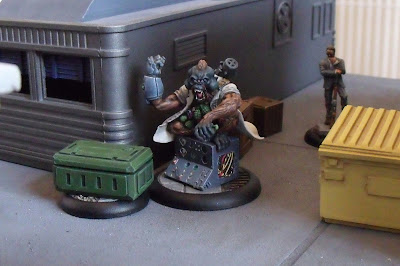 That looks great, will be checking him at Salute.