I have decided to set my Zombie apocalypse (using Last Days) on a Caribbean Island (I am calling it Last Days in Paradise). This is mostly because I have lots of Jungle terrain and I should be able to reuse some of the terrain and figures I painted for my modern African (Zugando) setting.

While waiting for some figures to arrive from Northstar and Foundry I went rummaging in the loft and found these guys. A quick rebase and a touch up and I have the start of a gang.

The back story (which explains why there are four white Outlaw MC on a caribbean island) goes as follows...When the shit hit the fan in mainland USA the Outlaws were well set up with safehouses, guns and ammo. That didn't stop them being overrun as the hordes of freshly animated tourists and retirees from Florida swept away all before them. The Outlaws fled, heading south, their bikes allowing them to keep ahead of the hordes and avoid the refugee-choked highways.
As they traveled they heard rumours that the islands in the Caribbean has somehow escaped the zombie apocalypse. They stole a yacht from the Florida Keys and set off in search of an island sanctuary.
They were wrecked off the coast of the island in a terrible storm and only four made it ashore. Their fellow Outlaws, their bikes and most of their weapons were lost to the sea. Furthermore the island was not the sanctuary they were expecting, as it too had been overrun by the zombies and descended into a barbaric fight for survival.
Luckily the Outlaws are well adapted to surviving a zombie apocalypse, and maybe even thriving. They are violent men, used to operating outside normal laws and morality. The only things that matters to them is their fellow brothers in the MC. They need to find a safe house, get some more weapons and then start looking for a way off this God-forsaken island. 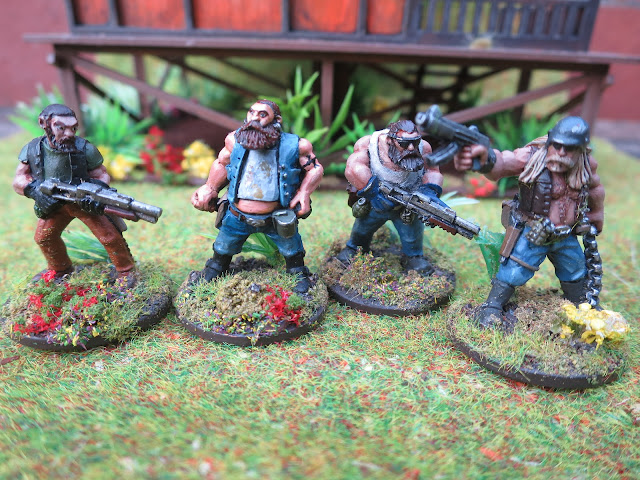 Great idea for a setting! This should be a blast.